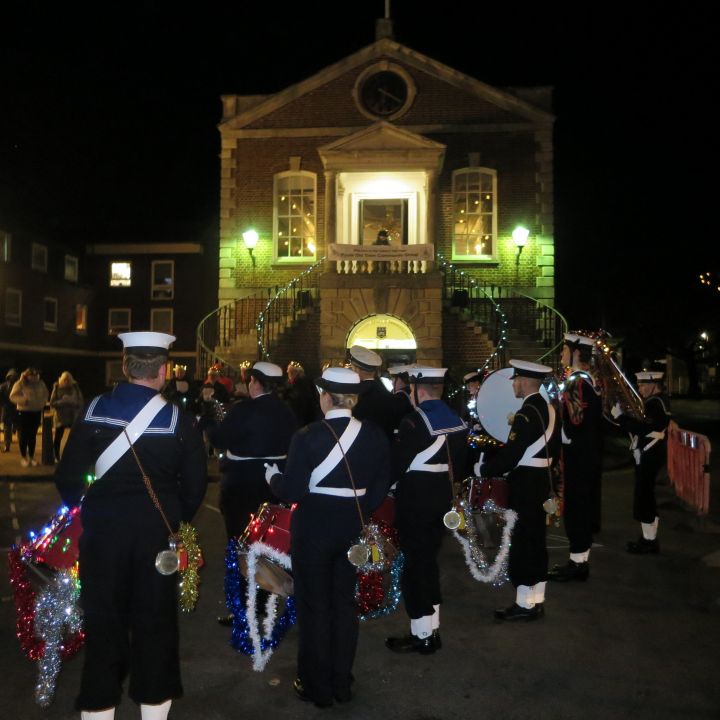 OUR STARS PLAY IN THE BRIGHT SKY!

As Christmas approached our hardy band members were pleased to be called in to action to help the Poole Old Town Community Group with their Guildhall Carols.

While Poole is not quite Royal David’s City (it does have a population of more than 150,000) it has a rich maritime history that TS Drax is keen to continue embracing.

The Grade 2 listed Guildhall itself has been a centre of the town’s civic activities since 1761, and 261 years later our cadets are happy to maintain such a tradition.

While the impressive building is located close to Poole’s quayside, the band didn’t on this occasion see three ships come sailing in but did contribute jingle bells amongst other instruments as they wished the residents an evening that was merry and bright.

It was a very cold evening, and the cadets did well to keep in tune in darkness whilst cultivating their Rudolph-like red-noses! They received a huge round of applause from the assembled crowd at the event’s conclusion.

Whilst dreaming of a white Christmas the band returned to TS Drax having left Poole Old town where “All is calm, all is bright.” 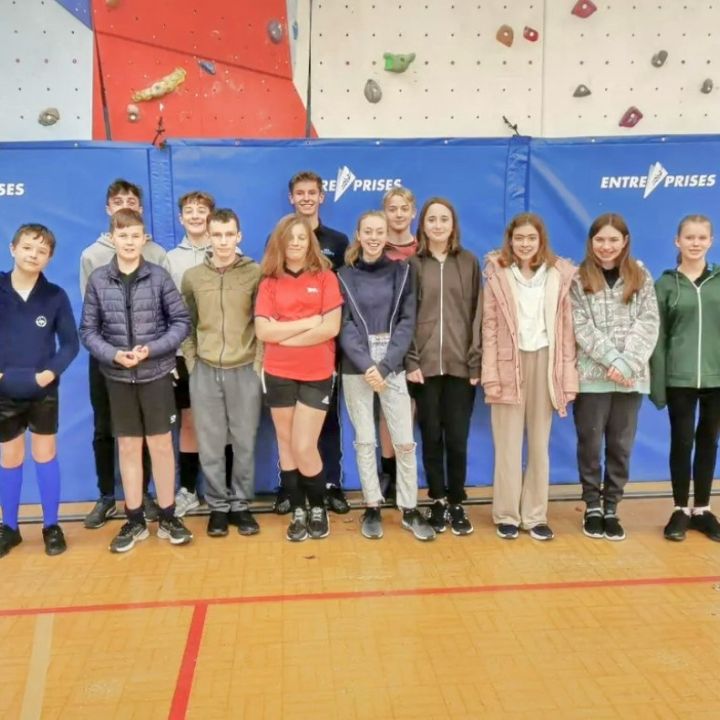 BACK OF THE NET!

A big well done to the Poole Sea Cadet football teams in the 2022 District Football competition held at the home of the Royal Navy School of Physical Training in Portsmouth - HMS Temeraire. Results included a 2nd place for the Junior Girls and strong efforts from both the Junior and Senior boys. 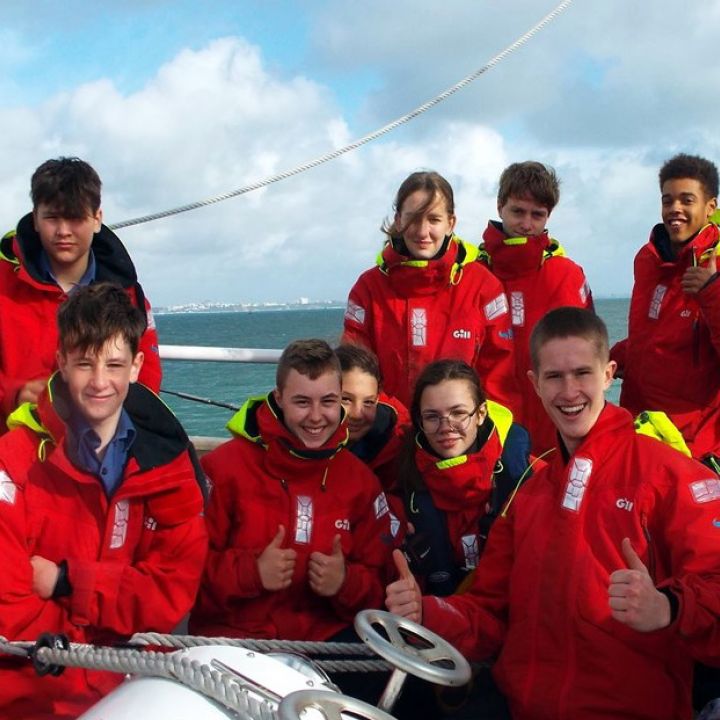 ONCE IN A LIFETIME EXPERIENCE

If ever there is a unique selling point of the Sea Cadet’s experience it has to be the opportunity for those Cadets of twelve years-of-age and over to sail offshore on one of the Charity’s fleet of sea-going vessels.

Two of TS Drax’s ship’s company have recently done just that and successfully completed their voyages. They explain in their own words their experiences, whilst giving advice to those contemplating following in their footsteps.

Cadet 1st Ellis recounted, “It was definitely the best week of my year. I really enjoyed sailing aboard T.S Royalist. If you like being out on the water, offshore is perfect on any of the different sea cadet vessels.”

“I would of course recommend going. It can be a challenge, but it is so worth it. It's a once in a lifetime experience.”

One of the best bits – it was thrilling!

The best bits? Ellis described when, “It was a really windy afternoon. We had got up early and had been sailing for a good few hours non-stop. We all worked really hard hauling the sails up. A few people had felt sick, but soon afterwards we all requested songs and danced on the deck while we were sailing.

I felt included and part of the group. One of our officers then asked if we wanted to go to the bowsprit, to sit in the netting at the very bow of the ship. A group of us sat there while we were approaching the isle of Wight. I could see the waves down below as we speeded ahead. It was thrilling.”

“I had so much fun on TS Royalist”, reminisced Cadet 1st Eve. “I absolutely loved climbing up the mast and getting to the top. The view was incredible, and everyone was watching and cheering me on as I went up.

The staff are really friendly, and well organised, and the facilities are really nice. I enjoyed meeting new people and making so many new friends from all over the country including the Isle of Man. I have kept in touch with them.”

What to expect going Offshore

Eve advises, “Be prepared to get along with people. Working as a team makes the experience so much better. The week will be what you make it. A smile can go a long way and being sociable makes it more worthwhile.

While it is hard work, you won't get away with not doing anything. Again, if you make a good team, it all pays off.

Be prepared for rough weather (especially if it’s later in the year) - it can get choppy and can feel a bit queasy at times.” 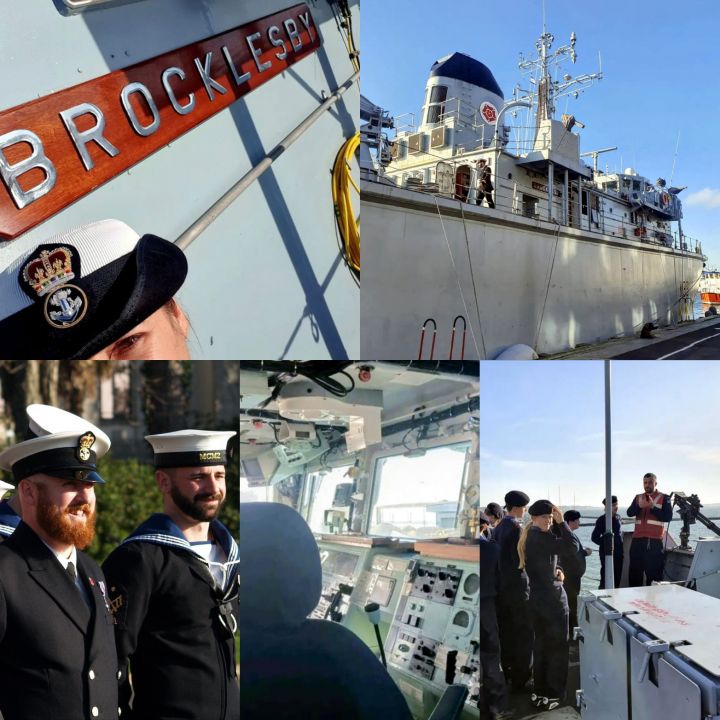 Our cadets recently visited the Mine Countermeasures Vessel HMS Brocklesby whilst she was alongside in Poole.

At 685 tonnes this 60 metre long vessel is not only tasked to seek out mines but she also undertakes duties as a coastal patrol vessel.

Putting the crew's skills to good practice in 2003 she successfully cleared a mined channel into the port city of Umm Qasr in Sothern Iraq.

Thank you to Lieutenant Commander Matthew Teare and his crew for such an informative experience. 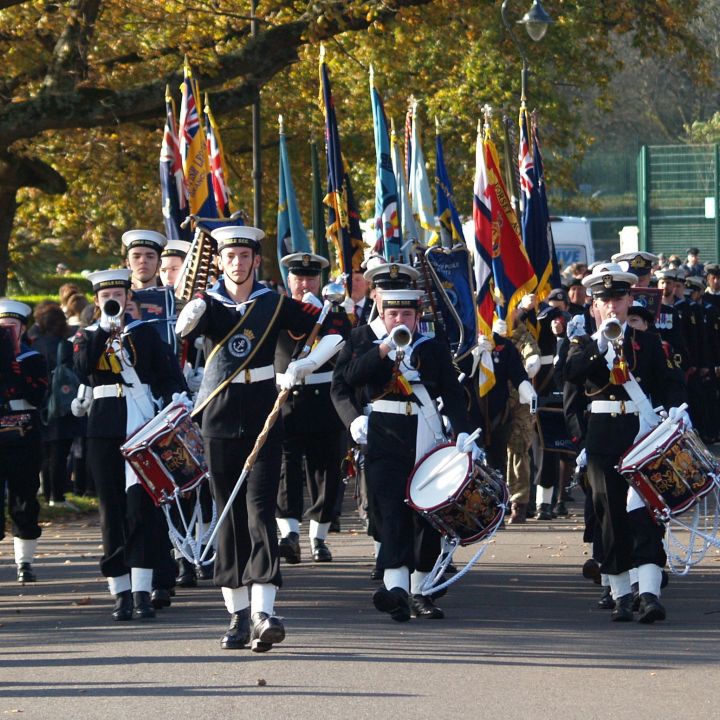 WE WILL REMEMBER THEM

On Sunday 13th November Poole Sea Cadets paraded in both Poole and Ferndown for Remembrance Sunday. In sunny conditions our band led both commemorations to remember those who had given their lives as a result of conflict. Large and appreciative crowds were present at both events. The band are pictured in Poole Park.