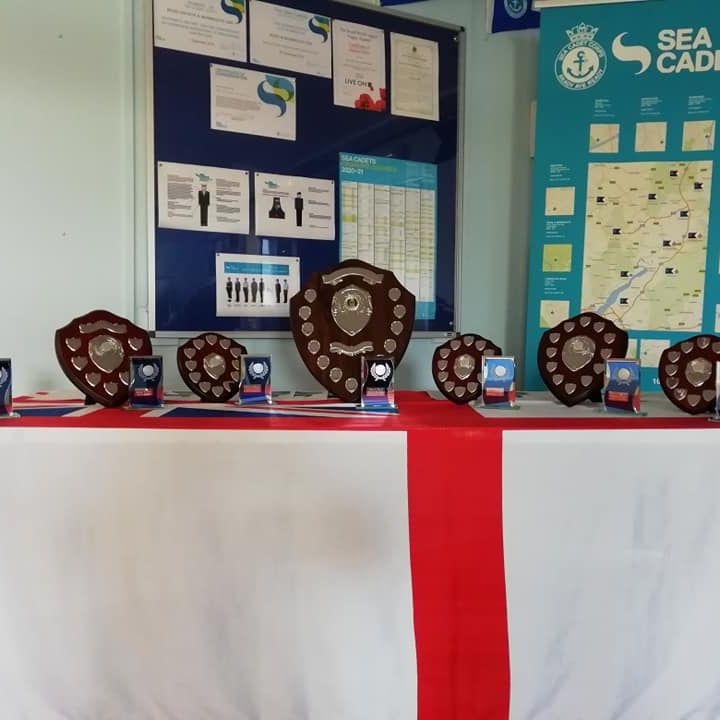 Ross-on-Wye and Monomouth Sea Cadet Unit reintroduced the Unit Awards Night back to the unit, after it has not run for the last few years.

As Commanding Officer (CO), it has been great fun reflecting on what the cadets and unit have achieved in the last year, and writing up the wording to support each award.

''I'd like to say a massive thank you to everyone who attended our unit awards evening, it was an absolute pleasure to welcome you all aboard and we hope you enjoyed hearing about some of the cadets journeys and experiences over the last 12 months.''

Special thanks for Mr and Mrs Lampert, both ex CO's of the unit, of which Mrs Lampert was the CO who open the unit nearly 21 years ago and Tony from Royal Naval Association-Monmouth Branch for presenting the awards. 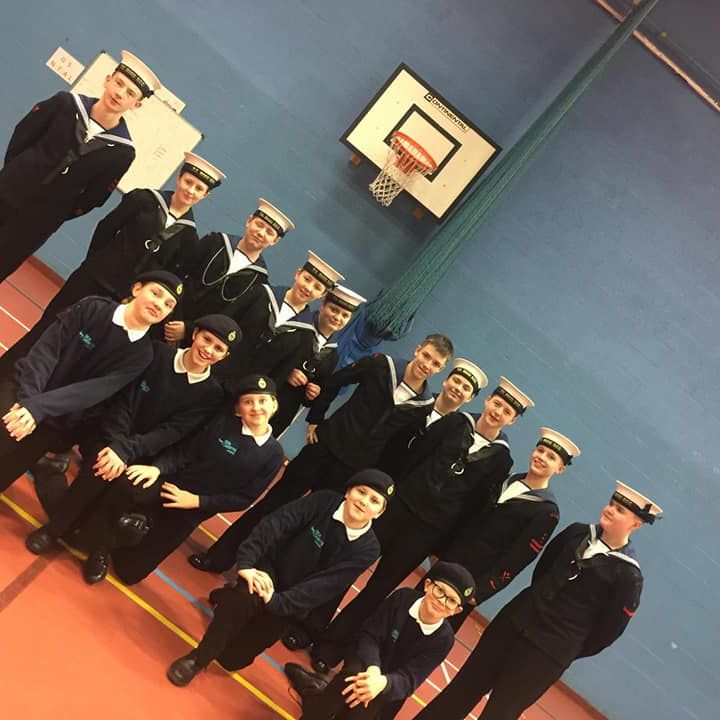 The cadets did themselves proud at the Distrit Drill and Piping Competitin with the following scores....

Plus the District Thropy which is awarded to the unit that enters/preforms overall the best at all competitions over the last 12 months - 3rd. 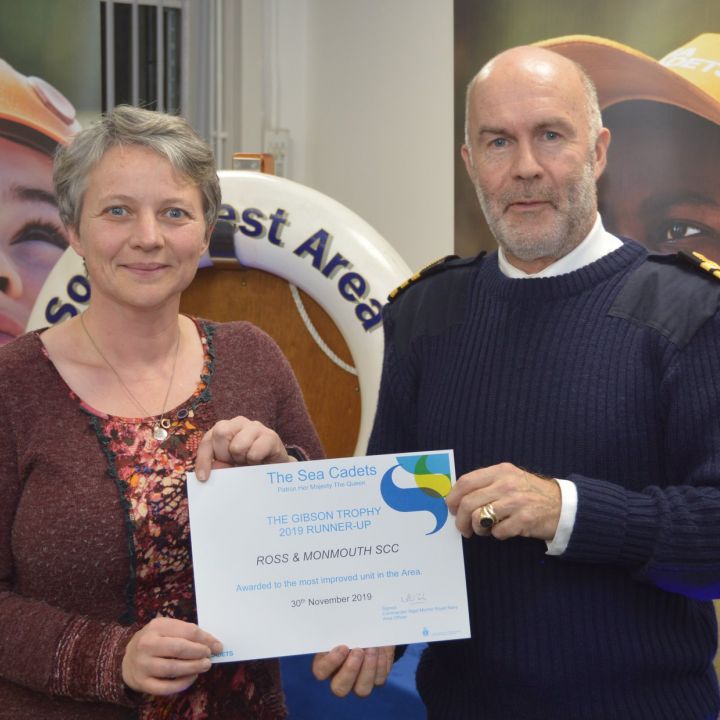 Annually every Area (6 in total) have an Area Conference in November.  During the annual conferences, it is an opportunity to celebrate the awards for the Area and the National nomination for awards.

At the South West Area Conference, Ross-on-Wye and Monmmouth Unit came runners up in the Gibson Throphy, which is awarded to the unit that has improved in most in the last year.
If you are interested in helping the unit develop further by joining the Sea Cadets as an Adult Volunteer or Cadet, please email us on rossmonmouthseacadets@gmail.com search for us on Facebook, Twietter or Instgram or come along to the unit on a Monday or Thursday 7:00pm until 9:15pm every week. 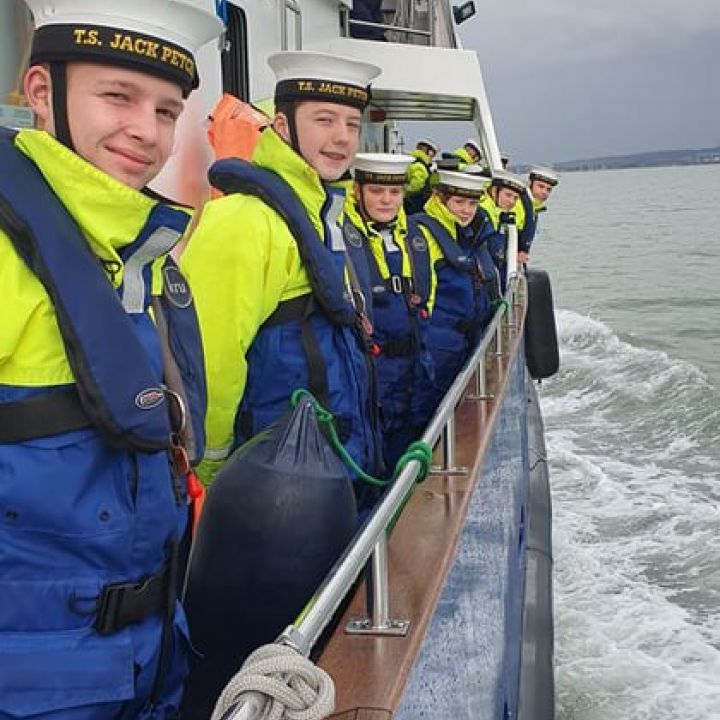 On a rather grey, wet and blustery Saturday 13th October 2019, 12 cadets, aged 12 to 17 from Ross-on-Wye and Monmouth Sea Cadet Unit set voyage for a week away on T.S. Jack Petchey. T.S. Jack Petchey is a Training Ship which is a power vessel and is 24meters long, 2.2meters draught and accommodates 12 cadets per voyage.

The reason for doing this voyage is because Ross-on-Wye and Monmouth Sea Cadet unit has been through a few turbulent years, with a number of changes of command and relocation of the unit. The unit is now thriving and a trip like this would benefit the cadets on so many levels, it would build on their teamwork, teach them independence and life skills, and put what they learn in the unit into real life.

While onboard the cadets had the opportunity to steer, use charts to navigate and got introduced to the maintenance of the boat, along with other opportunities. In addition to learning about the manning the boat they were also involved in housekeeping skills, such as helping with keeping the place clean and tidy, helping with meals and looking after their kit. Learning housekeeping skills was something that stuck in the cadets minds as when they returned and saw their Commanding Officer, the cadets had great joy in telling her that one of the younger ones had, learnt to make a bed, put his uniform on correctly and that when pots and pans are put away they learnt that big pans do not fit inside small pans.

The voyage started in Poole and due to the bad weather on the day of arrival and on the Sunday, the decision was made to stay in the harbour. As one cadet stated ‘this was instead of everyone getting sea sick’. During their time in Poole Harbour, the cadets learnt about the TS Jack Petchey, safety and emergency equipment such as the lifejackets, fire hydrants, escape hatches, the alarm and what to do in the event of a fire along with other lessons such as how to go to harbour stations.

On Monday 15th October, the weather had eased a little and the voyage to sea could commence. First port of call, Cowes. This is also when a rota for watches started. Watches, is the term used when the cadets are split into small groups and they are required to work as a team carry out various tasks at certain times during the trip. These tasks involved, steering the boat, taking look out and navigating. An older cadet who has been lucky enough to go offshore before said ‘it was good to refresh and learn new skills while leaving the harbour and setting out on a journey of a lifetime’.

The following day, one of the cadets reported ‘the seas were calmer today than on Monday and it has made for a more enjoyable time onboard. It is fun and the staff who are supporting us are really nice and it is an enjoyable experience’

During their travels, some of the place’s cadets travelled to, included Cowes, Portsmouth, Southampton and Lymington.

Much to the cadet’s amusement, shock and surprise they got woken to the sounds of the ‘Circle of Life’ followed by ‘It’s a Hard Knock Life’ being played over the tannoy system on the fourth morning by the engineer.

The final full day onboard, they travelled from Lymington to their final destination Gosport. On route, they stop to refuel TS Jack Petchey. During the last day, they encountered many large vessels including naval ships, helicopters and even a submarine.

This voyage has been a turning point in all of the cadet’s lives. They have gained confidence, learnt new life skills and learnt to work more collaboratively as a team. On a personal level they have all come away with great memories and stories from their week away. So much so, that even talking about the challenges of being sea sick and cleaning up each other’s mishaps seems to be the norm.

“I have learnt to be self sufficient”

“It has been a life changing experience”

“Journey of a life time”

Thank you to evryone who made this opportunity and experience and reality. Not only has it been a turning point for the cadets but also for the unit. 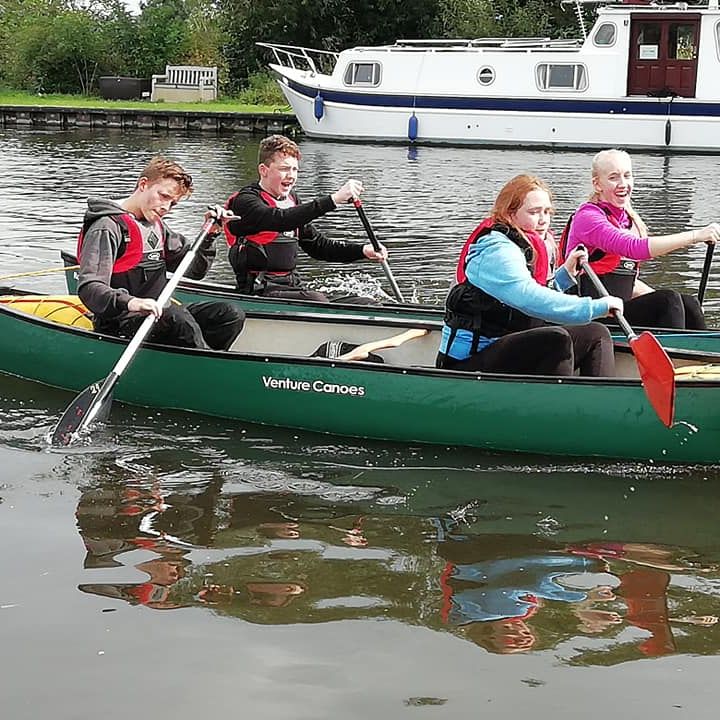 Cadets carried out a sponsored canoe to raise funds towards their offshore expereince later in the year.