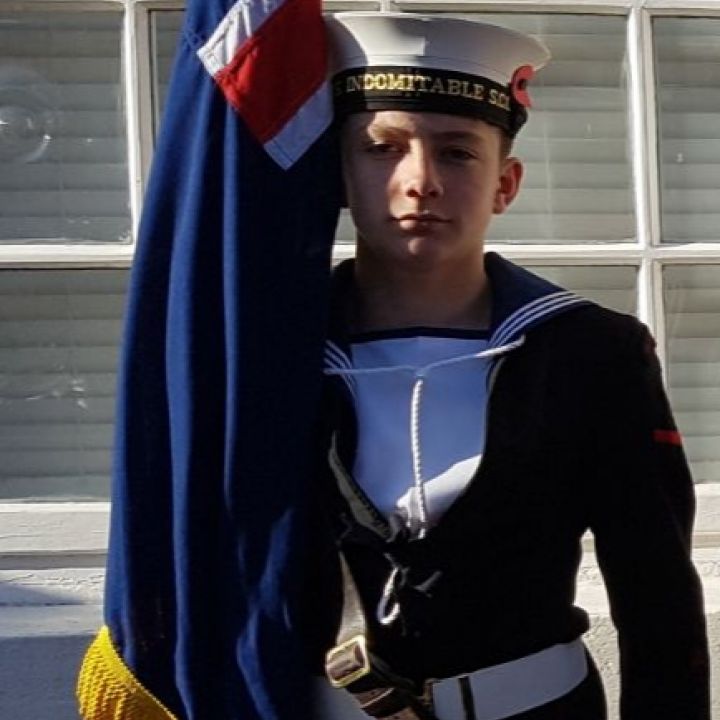 Long Eaton Sea Cadets have said their final farewell to Leading Cadet Will Lowe, who has bowed out of the Sea Cadet Corps after a 6-year career that came to an end on the completion of the Notts & Derby District annual Trafalgar Day Parade in Burton-upon-Trent on Sunday 20 October 2019.

Its not all bad news though, as Will leaves us to enter the Royal Navy at HMS Raleigh in Torpoint Cornwell on the 21 October 2019, to begin his 10 weeks of Phase 1 Recruit Training. From there he will then head to HMS Sultan to begin his Phase 2 apprenticeship to become a Royal Navy Marine Engineering Technician.

Leading Cadet Will Lowe joined the Sea Cadets as a shy, unassuming 11-year-old in 2013 at Long Eaton Sea Cadets T.S. Indomitable. He initially joined the Junior Section, as he wasn’t quite old enough for the Seniors Cadets at that point, and soon began to make his mark. Will quickly made friends within the Junior section, of which two in particular became close and remain Cadets to this day; we lose the other two to the Royal Navy later this year.

Upon turning 12, Will then transferred to the Senior Section of the Sea Cadet Corps, and that’s when the trouble really began.

It soon became apparent that Will had thirst for knowledge and was keen to be involved in everything the Sea Cadets could offer him; in fact, his training record as a Cadet makes for impressive reading.

As the years progressed Will could always be found supporting the Unit at Parades and Fund Raisers, as well as supporting and helping staff with various tasks. If Will wasn’t at the Unit he was away undergoing training which ranged from First Aid Training to Offshore and Inshore Dinghy Sailing and much, much more besides. In addition Will, along with his friends, was always at the front of the queue when it came to putting a rowing team together for the various regattas in the Sea Cadet Calendar.

Will was a particularly strong rower and through great team work and effort always managed to pull the team through and bring home the achievement certificates for all their hard work.

During his time as a Sea Cadet, Will also showed liking for taking part in Adventurous Training and achieved his Campcraft, Mountain Biking and Rock-Climbing awards. However, it was when he undertook his Marine Engineering Qualifications that the seeds were sown for him wanting to become a Marine Engineer in the Royal Navy, thanks in part to the enthusiasm of his instructors.

The highlight of Will’s Career was when he had the opportunity to go to sea as a crew member of one of the Sea Cadets many offshore craft. During these voyages Will was taught the fundamentals of Navigation and offshore sailing. This quickly went on to him gaining RYA qualifications in Power Boating and sailing. He also gained nationally recognised Paddle Sport Qualifications for kayaking and windsurfing.

As Will matured it soon became apparent to his Instructors that this young man had a flare for leadership and could often be seen organising and supporting younger members of the Unit in all that they were doing. If a younger cadet was struggling to grasp something, or just needed that little bit of extra support, you would find Will calmly going through what needed to be done.

To sum up Leading Cadet Will Lowe – Will is an enthusiastic young man who has often shown maturity beyond his years, and has the courage and commitment to step up when needed. Will throughout his career has unflinchingly upheld the Core Values of Sea Cadet Corps and is a role model to the younger cadets of Long Eaton Sea Cadets.

So, as one-page closes, another opens to a long and exciting career in the Royal Navy.

On behalf of the OiC, XO and all the Staff and Cadets at Long Eaton we wish Royal Navy Recruit Lowe well in his new career and wish him fair winds and calm seas 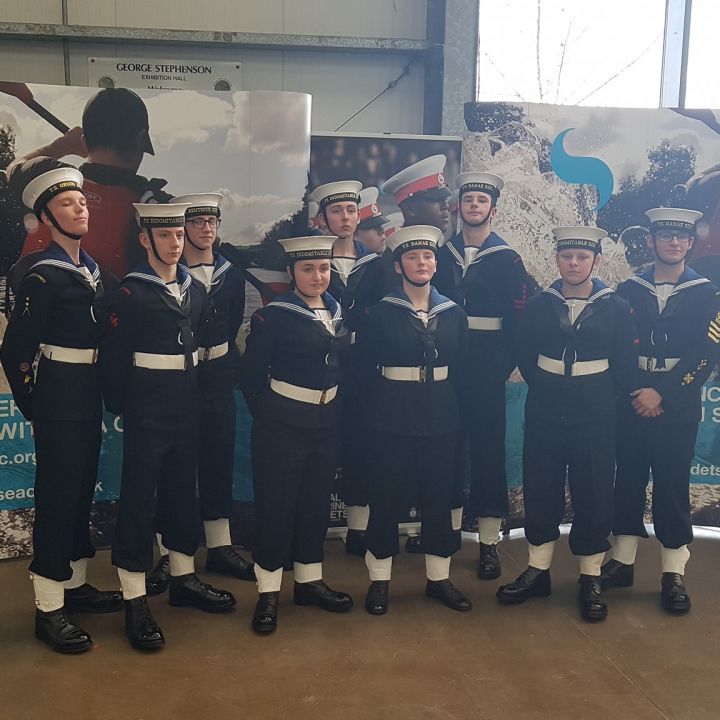 Another fantastic weekend for the Cadets of T.S. Indomitable, who have this weekend taken part in the Eastern Area Drill Competition which was held at the Newark Showground in Nottinghamshire. The four cadets from Long Eaton were part of an eight man combined Notts & Derby District Ceremonial Guard, which comprised of Cadets from T.S Indomitable, T.S. Orion and T.S, Danae.

The competion was the culmination of four weeks of hard intensive training and preparation auchestrated by the District Drill Staff who turned out a very smart and well disiplined team.

All the Cadets who made up the Notts & Derby Ceremonial GuardTeam are an absolute credit to their respective units  and upheld the finest traditions of the Corps. PO K Chatterley, XO of Long Eaton, said: "every Cadet in the combined Notts & Derby Ceremonial Guard Drill Team have worked very hard to get to this stage in the competition and should be justly proud of themselves. They are immaculatly turned out in their uniforms and it is quite obvious they have taken the time and effort to ensure uniforms and boots are second to none."

Soon it was time for the Notts & Derby Combined Drill Team to form up and face the Judges on the Drill Square. As they formed up it was obvious that they were nervous, but when the order was given to "March on the Guard" then team braced up with heads held high, shoulders back, chests out and showed a military bearing of people much older than themselves; as they marched on they would not have been out of place on a Royal Navy Parade Ground.

The Cadets, with a steely look in their eyes faced the judges, then went through their routine which went like clockwork. On completion the Guard Commander marched them off to a round of applause from the spectators. It was now a waiting game to find out who was going to reprensent the Eastern Area at the National Drill Competition at HMS Raliegh, the Royal Navy Phase 1 Training Establishment in Torpoint, Cornwall.

They Didn't have to wait long! Out nine teams that were fielded the results are as follows:

Bravo Zulu to Scarborough who will go on to represent the area at HMS Raliegh in three weeks time.

Although not a win for Notts and Derby, every cadet that took part was winner in our eyes and represented our District with Pride and Humility; Bravo Zulu to you all. 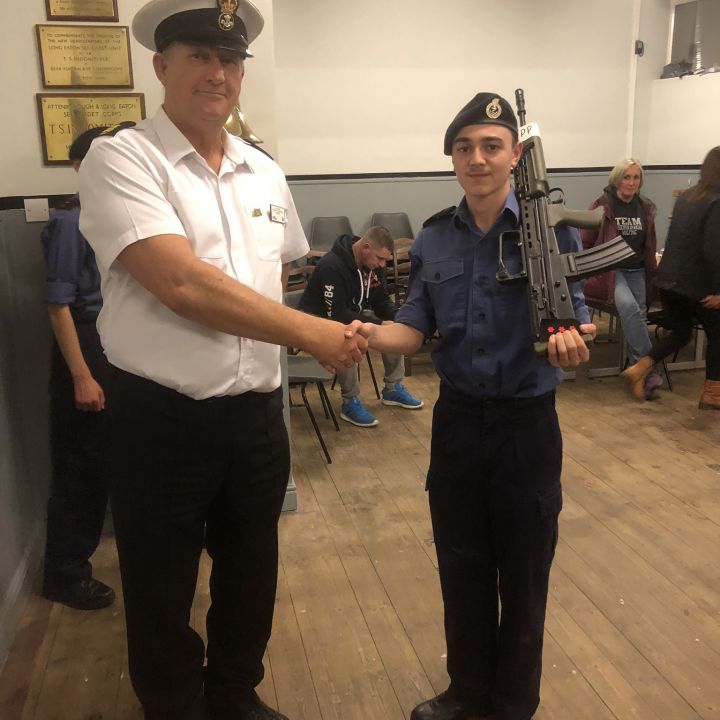 On Thursday evening Ordinary Cadet (OC) Callum was rated Able Cadet (AC) after sucessful completion of all modules to attain the next higher rate.

Please note: Sea Cadets are taught weapon handling skills as part of a structured training program that amphasises safe and responsible use.

It has been another busy weekend for the Cadets of Long Eaton’s T.S. Indomitable, with five cadets attending the Eastern Area Physical Training Course.

During the course, which took place at Chiwell Barracks, the cadets were taught about the importance of proper nutrition and physical exercise by the Eastern Area Physical Trainers, or in Naval parlance “Club Swingers.” The Cadets then undertook various physical fitness activities, such as bleep tests, the 2.4Km Run and various games and sports designed to enhance physical fitness and wellbeing.

All five of Long Eaton Units cadets who attended the course have said: “although the course was physically demanding, it was great fun and taught us a lot about teamwork and the importance of keeping physically active to maintain a healthy lifestyle.”