I wanted to write to pass on some of the comments I’ve received from parishioners and guests including the Deputy Lord Lieutenant and the County Chair RBL .
Everyone was incredibly impressed, the comments included how; dignified, smart, respectful, well behaved and polite they were.
I would also add my own compliments to such exemplary Cadets. 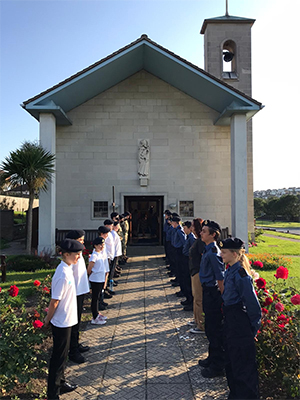 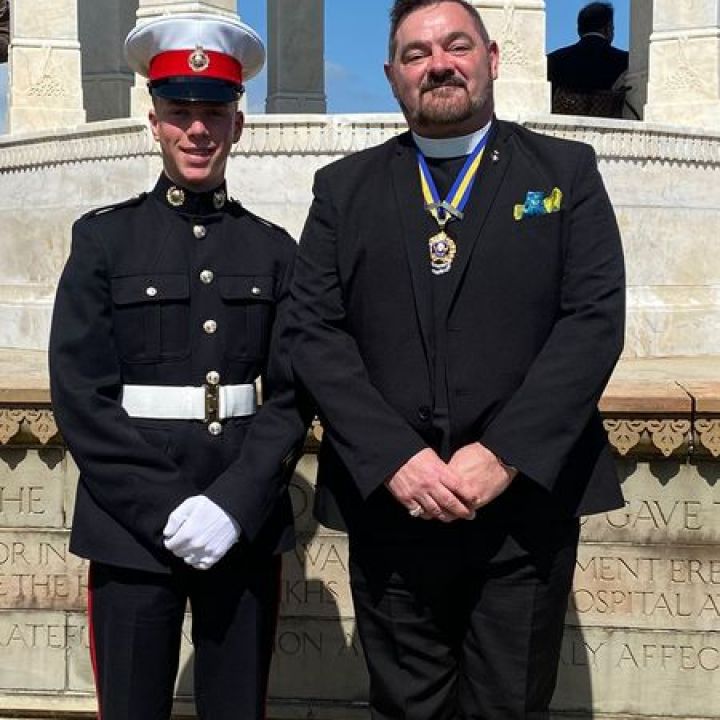 Said 'It was an honour to represent Sussex Royal British Legion at the Chattri Memorial. MC Harrison laid the wreath for Brighton and Hove City Branch and met the Vice Lord Lieutenant and the Indian Defence Attaché' 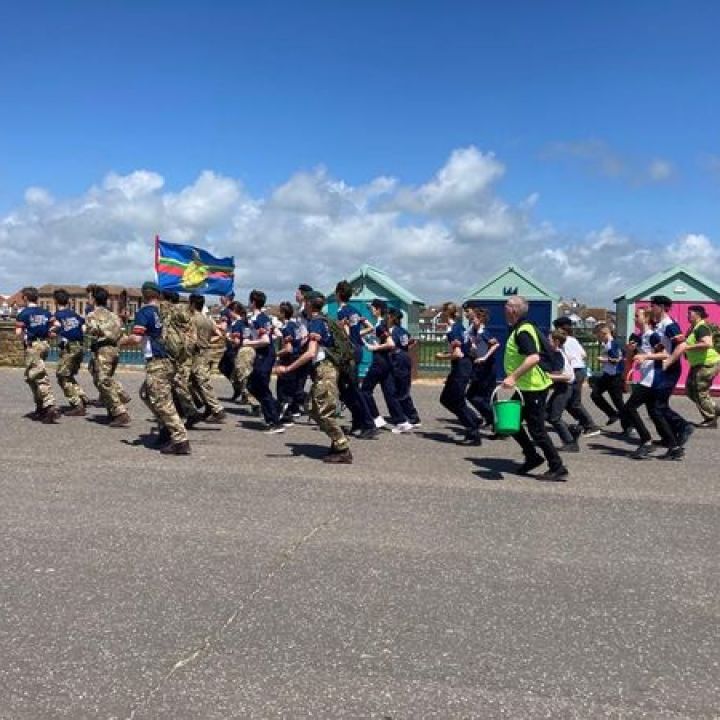 1th June 2022 at 10:30 Hove and Adur Sea Cadets marched/ran as a troop 5.6km across Brighton And Hove, Madeira drive along the seafront to Hove Enterprise centre where the Sea Cadet Unit Boat Station ‘Lizard HUBS’ is situated to commemorate 40 years since the Falklands conflict and to raise money for the Royal Marines Charity. The Organisers were former Royal Marines, Sergeant (SCC) Mathew Callow who is Hove and Adur Units Executive Officer and Sergeant (SCC) Tim Mitchell who is Hove and Adur Units Detachment Commander advised they were really proud of the Sea and Royal Marines Cadets (12years old to 18 years old) who were also joined by Hove and Adur Junior Sea Cadets (10 years old to 12 years old). Between them all they have so far raised over £1100. If anybody wishes to add to their efforts, please tap the link.

Our Vice-Chairperson for the Parents and Supporters Association commented “I think it is really important for the cadets to show support for historical events that our armed forces commemorate, and raise funds for military personnel. It starts conversations, amongst cadets, young people and the public that see them when on these parades or marches, which is important so that our history will be remembered.

I am always proud as a parent to see smartly turned-out cadets, presenting themselves and the unit to the local community.”

Sgt(SCC)  Keilthy commented "I have an immense sense of pride being part of the Hove and Adur Sea Cadet Corps, working with local young people who want to open themselves up to new experiences, learn new skills and develop existing ones. Forming new friendships and promoting confidence and leadership that will benefit them at school and in the future.
It was humbling to see so many of our cadets give up their time this weekend to support the Royal Marines Association charity by being part of a 5.6km forced march (fast paced march) as part of the national 40 year Falklands anniversary effort. As a Royal Marines Cadet Instructor and as an ex-servicewoman I couldn’t have been prouder of the great attitude and effort of the cadets, affirming that being a volunteer is by for the most rewarding thing I have ever done."

The Sea Cadet Unit’s Commanding Officer Chief Petty Officer (SCC) Duncan Picknell commented “It was fair weather and this really brought the Unit together with the unpaid volunteers, the strong cadet size and the ever-willing parents supporting everything we do. The cadet march, which in Royal Marines terms is a ‘yomp’, for the Falklands 40 1982 – 2022 commemorate the brave men and women who did the duty they were trained to do to keep the British Falkland Isles British which the Falklands People have always wished for.

“We welcome all adults living in the area to pop in to the unit when we’re open to meet other volunteers and cadets, have a tour of the unit, and have a chat about any roles that suit you. Don’t be put off if you haven’t got any relevant qualifications, all you need is basic knowledge and lots of enthusiasm.

“We need your help to keep inspiring young people through nautical adventure and to keep giving them the best possible head start in life.”

Volunteers are supported by a network of other volunteers and employees. As a new volunteer, you will receive an induction and will be given training and support to make you feel comfortable in your role. Sea Cadets is always there to provide ongoing help and support. 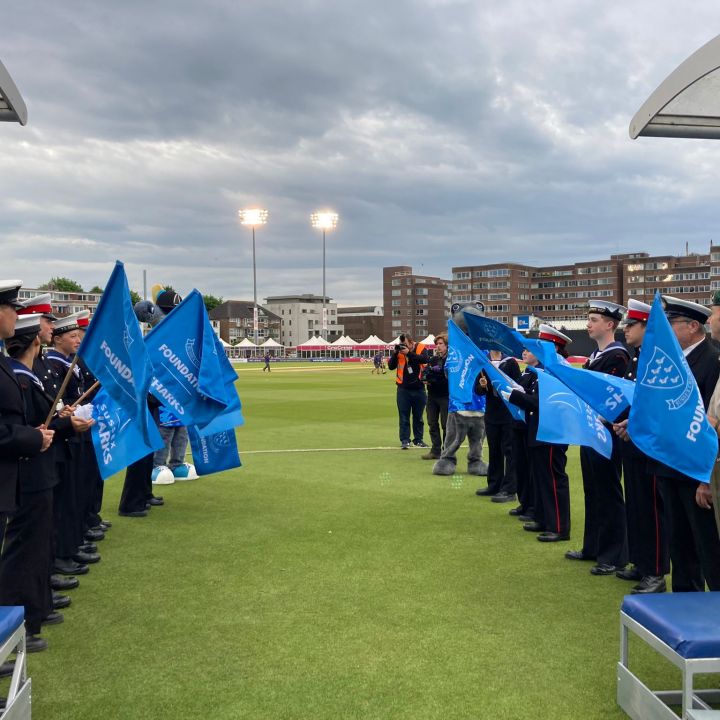 Sussex County Cricket Club is the oldest of eighteen first-class county clubs within the domestic cricket structure of England and Wales. It represents the historic county of Sussex. Its limited overs team is called the Sussex Sharks. The club was founded in 1839 as a successor to the various Sussex county cricket teams, including the old Brighton Cricket Club, which had been representative of the county of Sussex as a whole since the 1720s. The club has always held first-class status. Sussex have competed in the County Championship since the official start of the competition in 1890 and have played in every top-level domestic cricket competition in England.[1]

The club colours are traditionally blue and white and the shirt sponsors are Galloways Accounting for the LV County Championship and Dafabet for Royal London One-Day Cup matches and Vitality Blast T20 matches. Its home ground is the County Cricket Ground, Hove. Sussex also play matches around the county at Arundel, Eastbourne and Horsham.

Sussex won its first official County Championship title in 2003 and subsequently became the dominant team of the decade, repeating the success in 2006 and 2007. In 2006 Sussex achieved ‘the double’, beating Lancashire to clinch the C&G Trophy, before winning the County Championship following an emphatic victory against Nottinghamshire at Trent Bridge, in which Sussex defeated their hosts by an innings and 245 runs.[2] Sussex then won the title for the third time in five years in 2007, when in a nail-biting finale on the last day of the season,[3] Sussex defeated Worcestershire early in the day and then had to wait until past five o'clock as title rivals Lancashire narrowly failed to beat Surrey – prompting relieved celebrations at the County Cricket Ground, Hove.[4] Sussex enjoyed further limited overs success with consecutive Pro40 wins in 2008 and 2009 as well as beating Somerset at Edgbaston to lift the 2009 Twenty20 Cup. The south coast county ended the decade having won ten trophies in ten years. 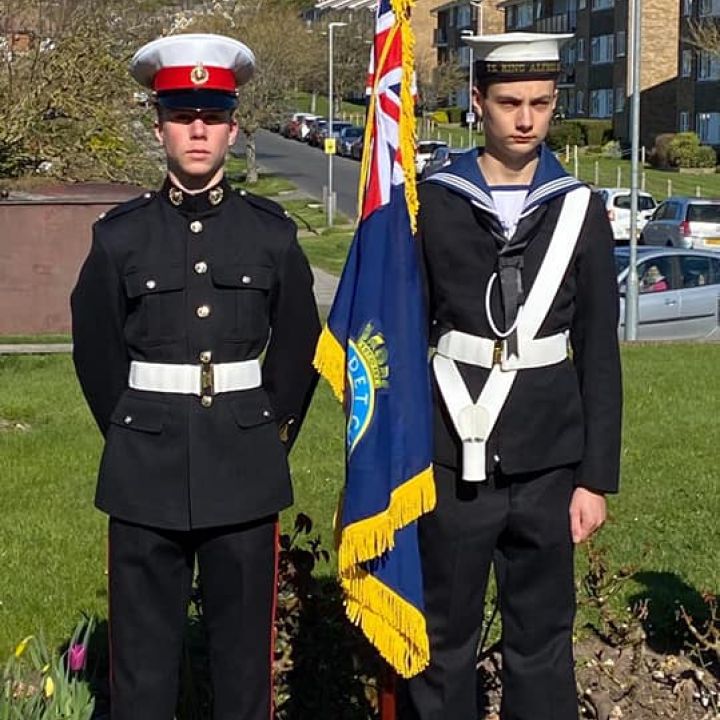 Thank you very much to Chaplin(SCC) Jim Horton RNR, the Deputy Lord Lieutenant Major-General John Moore-Bick CBE and Mrs Anne Moore-Bick, the District Volunteers, Hastings Lord Lieutenant cadet, Brighton Unit and all the Volunteers and cadets of Hove and Adur Unit for a very special and meaningful standard dedication today.

Thank you so much for the warm welcome at the Standard Dedication service yesterday. It was all very impressive in its organisation and presentation. It was a great joy to Anne and to me to meet the adult instructors, some of whom we’ve met before on Lieutenancy and Shrievalty occasions, and to see so many happy young faces. It was also inspiring to meet cadet parents who think so highly of the Corps and all that it does for their sons and daughters. They were impeccably turned out for the occasion. Anne, who has a keener eye for these things, complimented several on their ironing and I noticed the high polish on many boots. Habits which will last a lifetime.
Please pass my thanks to all, especially to those who prepared that tasty buffet, and to your churchwardens who greeted and escorted us. You have obviously got a vibrant level of support at St Nicholas.
And weren’t we lucky to have such a fine day! 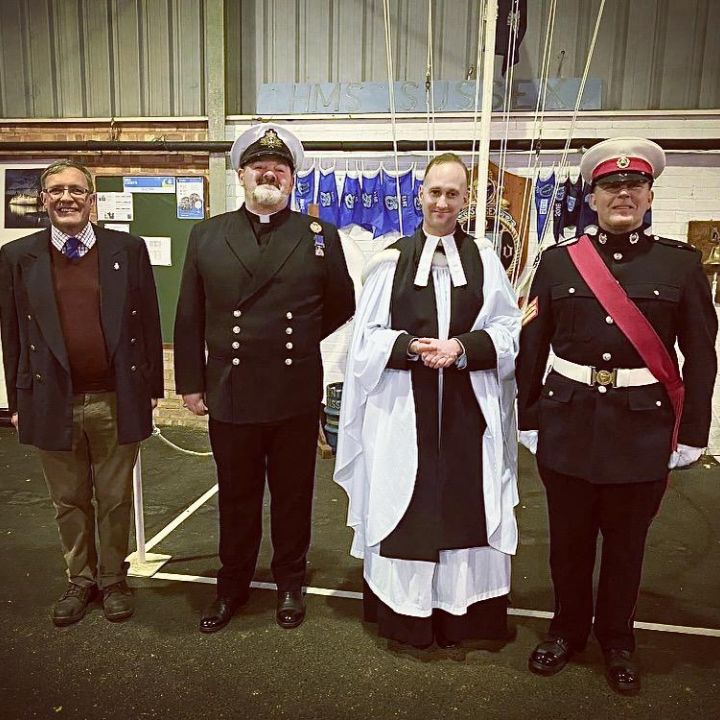 CH (SCC) Nick Archer RNR has been officially commissioned as (a) Chaplin at Hove and Adur Unit.