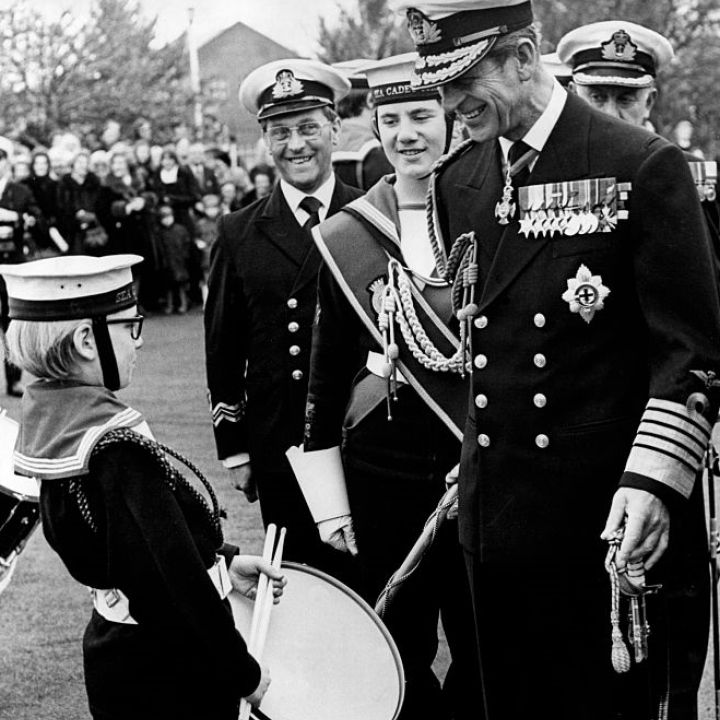 Sea Cadets is deeply saddened by the passing of His Royal Highness Prince Philip, The Duke of Edinburgh.

His Royal Highness served as Admiral of the Sea Cadets Corps from 1952 to 1992 as well as having served the Royal Navy as Lord High Admiral of the Fleet and Captain General Royal Marines.

“Sea Cadets remembers with affection The Duke of Edinburgh’s 40 years of dedication and service to cadets and his continued deep interest in our work launching young people for life.

Many of our cadets have also greatly benefitted from His Royal Highness’s inspirational Duke of Edinburgh Award Scheme which continues to enable many thousands of young people around the world to prepare for their future lives with confidence, skill and positivity. His Royal Highness leaves the world an extraordinary and enduring legacy.”

Ensigns across Sea Cadets are being flown at half-mast. 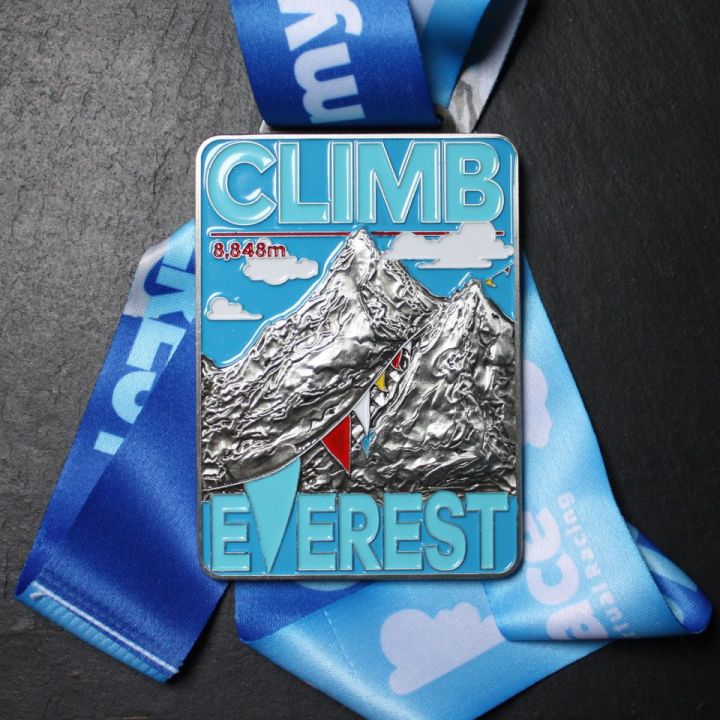 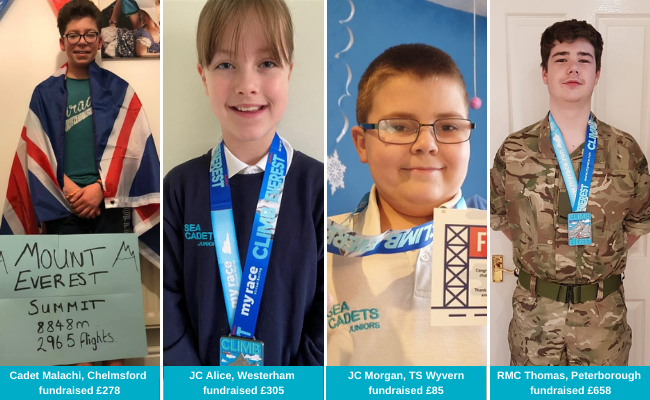 The Virtual Everest Challenge has seen 100 cadets, volunteers and family members take part in reaching 8848m, the height of Mount Everest, through hiking, stair climbing and even upping the incline on a static bike. However they chose to complete the challenge over £11,000 has been fundraised and we are so proud of everyone who has taken part! Here are what some of the cadets had to say:

JCFC Oliver from Burton fundraised £200 – “I joined this challenge as I was looking for something to do during lockdown to keep active and thought this is a great way to raise money for the unit and Sea Cadets. I love climbing and one day hope to climb Mount Everest itself!”

Cadet Evan from Conwy County fundraised £100 – “The challenge built up my fitness and kept me motivated to do something through Covid lockdowns. It helped to raise money for Sea Cadets at the same time.”

Monty is a Royal Marines cadet at TS Galloway in Preston who fundraised £100. He credits much of his achievements to the principles of integrity, determination, achievement & leadership embodied in the ethos of the Sea Cadets. “I've taken part in several challenges during the Covid-19 lockdown and have to say the Virtual Everest Challenge has been my favourite.”

JC Felix from Burton was determined to finish, that with 3 weeks to go he still had over 3800m still to do. His family told us: “We had to sit him down and say that, despite all his effort, Lockdown restrictions and illness had made it impossible, but we would explain and ask for an extension. He would not hear of it!! "I can do it, I know I can! Don't ask for an extension!" So after some calculations he decided that he would climb our stairs at home SIXTY times EVERY DAY for the remaining THREE weeks! He has 2 days left of his 12 weeks and his effort and persistence have been Herculean! This is the hardest challenge he has done but the summit is in sight!”

One cadet, Hannah from Farnham, Aldershot & Fleet, even had a very special donor! Her mum said: “The coolest thing about Hannah's fundraising was that she had a very special donor - Sir Chay Blyth CBE BEM! Sir Chay was the first person to sail single-handed non-stop westwards around the world, and mentor to the first woman to do the same. Over the past few years he has followed Hannah's sailing progress with the Sea Cadets including her voyages on TS Royalist, both yachts and TS Jack Petchey… awesome to have such a donor!”

A HUGE well done again to all those who have finished the challenge and a big good luck to those who are still going – you can do it! BZ. 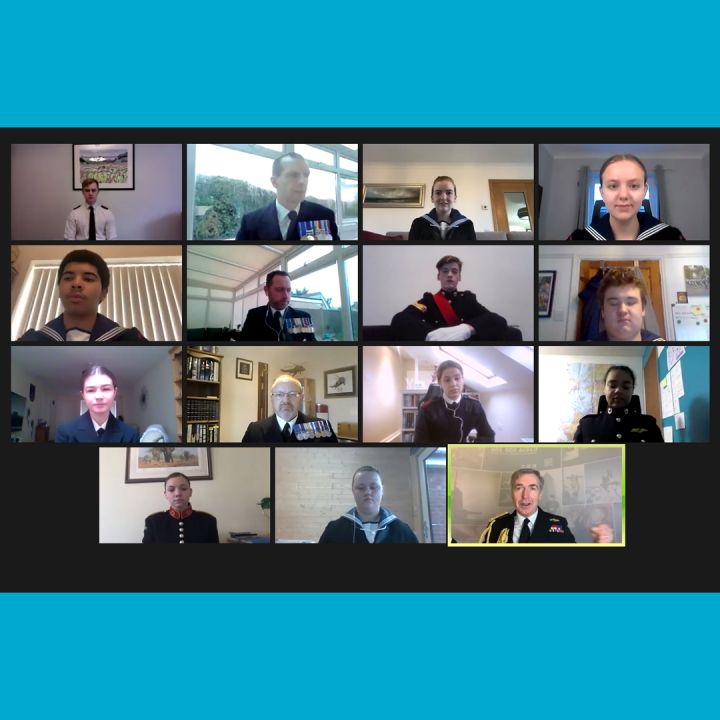 Today we celebrated the investiture of our six new First Sea Lord’s Cadets for 2021. This year, owing to the lockdown, the ceremony was held virtually rather than the usual location of HMS Victory in Portsmouth. The First Sea Lord, Admiral Radakin CB ADC joined the cadets along with other Royal Navy cadets from the CCF and VCC as well as parents and guests on Zoom. During their year in the role the First Sea Lord’s Cadets will help to represent their peers on the National Sea Cadet Forum and as restrictions allow attend events to represent the Corps alongside the Royal Navy. 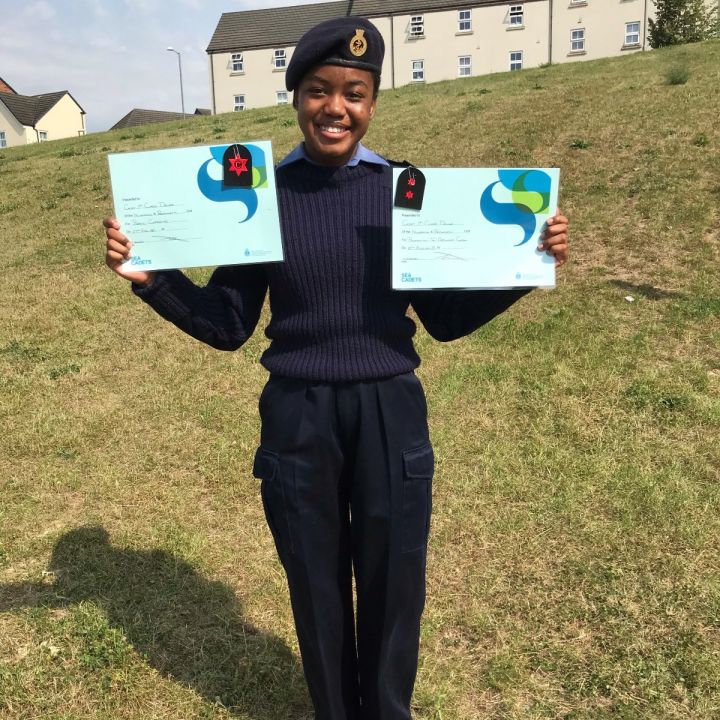 We asked cadets to name their volunteer heroes for last year who went above and beyond in virtual Sea Cadets, #Fallinathome

Thanks to OC Ashryah, Nuneaton & Bedworth Sea Cadets for their nomination:

“I would like to nominate PO Holland for going above and beyond during lockdown. We couldn’t clock up any boating hours this year due to lockdown, but the Sea Cadets Portal helped us to track our pathways and gain qualifications by engaging virtually."

"I had given up hope of achieving anything, but PO Holland helped us get enrolled onto the Cadet Training Platform to complete our modules for promotions. I’m looking forward to the re-opening of our unit, so we can get back to serving our community and working towards my end goal of joining the Royal Navy.”

You can read all the nominations on the new The Sea Cadet magazine website: https://theseacadetmagazine.org/virtual-volunteer-heroes/

Send in your nominations to SCMag@ms-sc.org and we’ll reshare your stories! 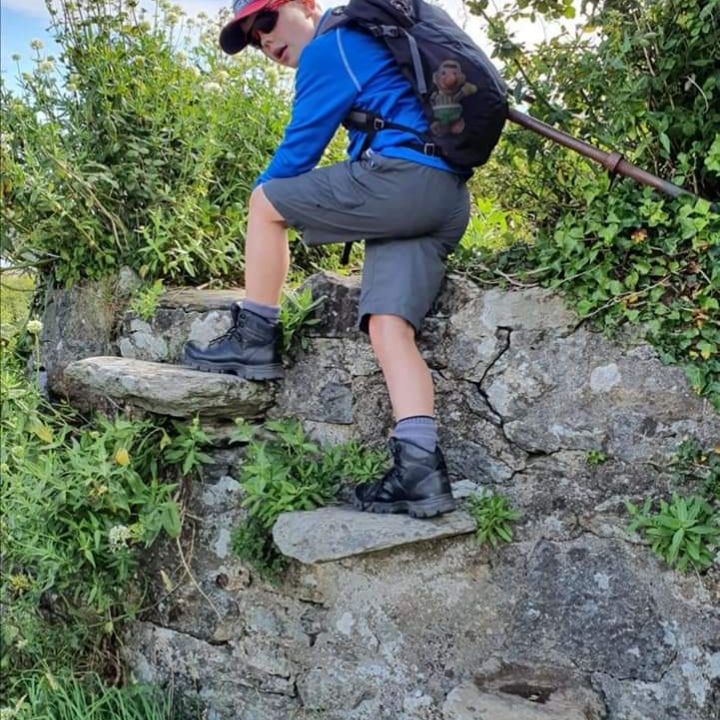 Team Sea Cadets Virtual Everest c;imbers have raised an huge £8,000 in the challenge so far. BZ!

Check out Felix's story, he wanted to go further than his Dad who reached base camp, beating him already!

“My dad loves mountain walking. He's done the Alps, the High Atlas, Kilimanjaro and more. I've always wanted to go with him up mountains and for the last few years I have been. We've done walks in Snowdonia and the Peak District so far. But never abroad yet. I don't need a passport for this challenge though - sometimes I only go as far as my staircase at home! But I'm going to go higher than my dad has ever gone. He has trekked to the South Everest Base Camp in Nepal (5364m) but I'm going to go all the way to the top with this challenge. I'm glad I don't have to deal with altitude sickness though! I wanted to get involved with this challenge because it has been a really tough year for everyone and my unit was under the River Trent instead of next to it at the start of it! With the flood and Covid, I wanted to raise money for them but also for other Units so we can all get back to normal as soon as we are allowed to. I put a low target to raise because I didn't want to pressure my family or friends because lots of people have lost their jobs or been furloughed. It's been a hard year but I'm enjoying getting out walking with my dad and will celebrate getting higher than Base Camp as well as to the summit!" JCFC Felix, age 11, Burton on Trent Unit.