Tonight we welcomed back our cadets from a two week break for Christmas.

With lots planned for 2019, the cadets were seated on the deck for their year safety breif and update.

This year our efforts are concentrated on getting cadets offshore and on more courses to give them the opportunities available within the corp that they have yet to take advantage of!

We have lots of fundraising planned for our Trip to Malta Sea Cadets in August and are already well on our way to reaching our grand total! 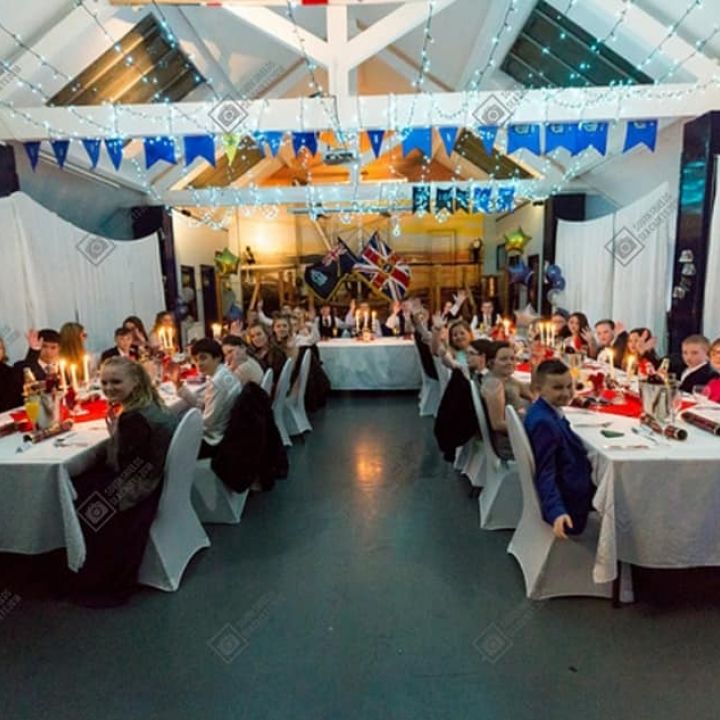 Whilst we endevour to make sure our cadets are treat for their end of year night, we also like to make sure that they get the best experience that is possible.

This year, rather than taking our kids to the Panto and debating who did and who didn't! We decided to hold a dinner party and disco for our cadets. Where they could arrive in their best dressed suits and ball gowns for the evening and be waited on by staff and supporters for the evening.

The party started with a toast from our Overall Best Cadet 2018, congratulating the Staff and Supporters on their hard work and dedication and quoting that it wouldn't be the same without us running the show!

We then went onto a delicious 3 course meal that consisted of Vegetable Soup or Melon Starter, A Christmas Dinner with all the trimming, pigs in blankets and lots of gravy!! (lucklily there were not spills or messes made!)
To finish of the dinner the cadets were served a chocolate cake and cream.. this finished of their dinner well before The "Mocktail" Bar and Disco commenced.

Strawberry Daquiries and Mojitos were flowing and the dance moves were shocking the get go, but the cadets were thoroughly enjoying them selves. With hits from Queen and the Cha Cha slide... the night came to an end and the cadets all made their way home.

With the clean up under way, the staff reflected on the year gone and wished eachother a Merry Christmas and a Happy New Year, as the unit was closed for the last time for 2 weeks break over Christmas.

We hope that all of our supporters and families enjoy their christmas and new year and we hope to see you all again on the 7th of January, and look forward to the exciting opportunities that await us in 2019.

This year we hold host to our Annual Awards Ceremony for TS Collingwood.

With special guests including The Lord Leuitenant of Tyne and Wear, The Mayor and Mayoress of South Tyneside and Guest from the MSSC and District Officers, our cadets were proud as punch to show of their unit and the achievements that they had acomplished throuhgout 2018.

With a smart and efficiant Guard to greet our Lord Leuitenant, she complimented and congratulated the staff and cadets on their hard work and turn out for the evening.

With a short talk about the past year and a tour around the unit we were ready for award to be handed out and the cadets waited in anticipation to hear who would be recieving these.

With a twist on the cards this year we saw our best cadets on the deck recieve their awards, 2 being awarded to the Marine Detachment in a change of tune this year. 4 cadets had recieved their award for dedication and commitment to their cadet career and future.

Participation and Best Division were next and then our new award "The Newby Award"!

Finally the overall best cadet went out and the deck congratulated this award presented by the CO of the Unit.

To end the evening our newly built and furnished classroom above the galley and landing was opened by the chairman of the unit Mr John Eltringham MBE and named "The lightfoot room". A honour to one of our supporters Mr John Lightfoot MBE.

Our guests then posed for photos with the award winners and parents got the all important photos infront of our standards on the deck.

A great night enjoyed by all and well deserved awards handed to the most deserving candidates.

A great end to our Cadet year and a brilliant way to go into 2019.

Over the past year our cadets and staff have acomplished and achieved many great and outstanding things.

We have raised over £5000 in funds towards Malta 2019 and are well on our way to achieving our target with fundraising being accepted we are confident of our target being met soon!

We have also been awarded the Stephenson Trophy and the Captains Cup for being the 3rd best Sea Cadet Unit in the whole country. This is a massive achievment for our unit and we strive to achieve better for 2019!

Amongst all of the awards, we have also seen our cadets achieve amazing things and take up opportunities that they wouldn't usually have the access to. With qualifications and climbing the rank ladder lots of our cadets so success in 2018.

We would like to thank all of the staff and supporters of our unit for their hard work and dedication this year and cannot wait to see what 2019 brings!

This year our cadets have taken part in various efforts to support Rememberance day in 2018.

They have fundraised 2 weekends in Morrisons, South Shields raising a total of £1918.57!

This is an amazing effort made by our cadets and a proud one at that!

With over 30 cadets turning out for the parade at South Shields Cenotaph, we stood out from the croud and paid our respects to those who gave their today for our tomorrow.