It's not often that the Area Officer pays an informal visit to a Unit, but it's the sort of thing that Newham Cadets take in their stride.

But when the CO received word with only an hour's notice that the Captain would also be dropping by, he wondered how everyone would cope.

He needn't have worried. The Cadets and Staff just got on with their evening as if nothing unusual were happening. The Captain was there to take part in a TV interview and the Cadets formed the backdrop, just doing what Sea Cadets do with bends and hitches. You'd never have known that the most senior officer in the Corps was there.

As for the Area Officer, well, his visit was planned but even so, the Unit simply carried on as normal and were not even slightly phased when he dropped into classes for a chat.

He said that he was most impressed by all the happy smiling faces. And why wouldn't he be? That's the normal routine for Newham Unit! 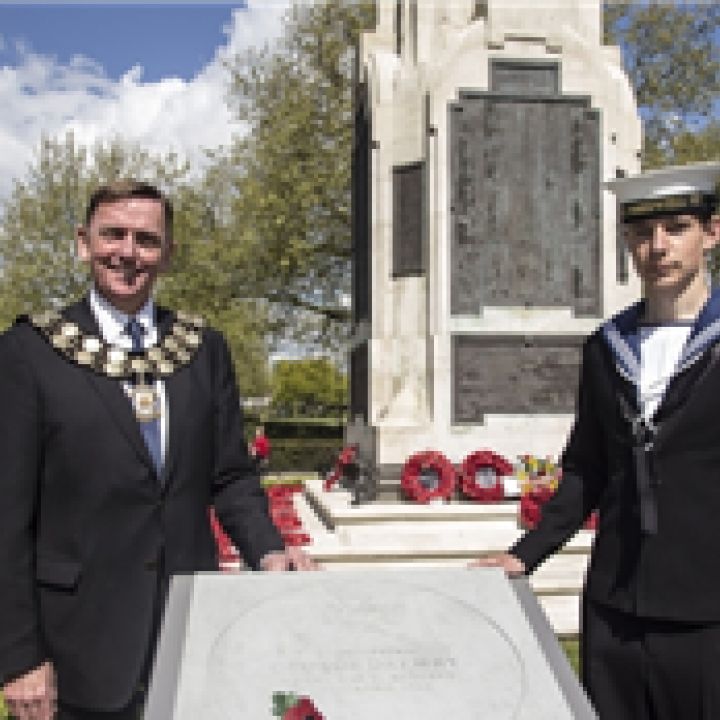 Cadets from Newham Cornwell VC Unit were honoured to be asked to assist the Mayor in the unveiling of a paving slab commemorating Midshipman George Drewry VC RNR who, in 1915 performed an act of such bravery, wounded and under fire, that he saved the lives of countless soldiers landing at Gallipoli.

Each year until 2018, the London Borough of Newham will be unveiling a slab to each of the borough's VC's, close to the date of the act of bravery that earned them their honour. Each slab bears an image of the Victoria Cross and the recipient's name. George Drewry was the first. There are five in all, two of whom served with the Royal Navy including, of course, Jackie Cornwell.

The ceremony for George was held on 27 April in Central Park, East Ham and Sea Cadets played a central role.

After the official business was over, two Cadets and two members of Staff headed over to City of London Cemetery, where George is buried, and laid a poppy wreath on his grave.

Although little was known in the Unit about George Drewry before this, the wreath-laying is now set to become an annual event. 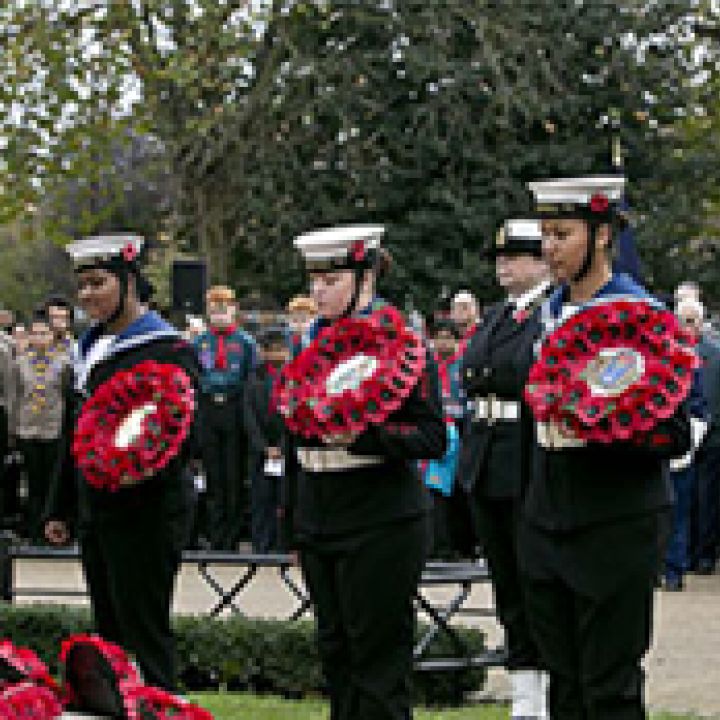 There were tears in the eyes of spectators as four Newham Sea Cadets performed the traditional March of Respect at the War Memorial in Central Park, East Ham on Remembrance Sunday.

Before many hundreds of gathered Veterans, Cadets of all services, local dignitaries and other people either paying their own respects or simply spectating, the Guard, led by Chief Petty Officer Sue Bilverstone manned the four corners of the Memorial before forming up to march right the way around.

Then, with barely a word of command, the four Cadets knelt in unison to lay their wreaths at the foot of the Memorial.

“It was so emotional,” said one lady from the Royal British Legion, “and beautifully done. The Sea Cadets did us proud, as they always do.”

The Last Post was played by the Unit Commanding Officer, Lieutenant Adam Mendrys and the remainder of the Ship’s Company formed the first platoon of Cadets.

There was a very high turnout for this year’s parade, which included cars supplied by the Royal British

Legion to transport Veterans who, through age or disability were not able to march.

The special nature of the 2014 commemorations was heightened by the presence of a field gun, which was fired to mark the start and end of the two-minutes silence – to the consternation of the local bird population and setting off a number of car alarms.

The salute was taken by Mr John Barber DL FRCS and, for the first time, Sir Robin Wales, Mayor of the London Borough of Newham.

On Tuesday 11 November, four Newham Sea Cadets accompanied by two members of staff joined other Cadets to pay their respects at the war memorial at Ford Motor Company in Dagenham. This event has grown over recent years and this year, for the first time, the company was joined by representatives from the Army Cadet Force and Fire Brigade Cadets. 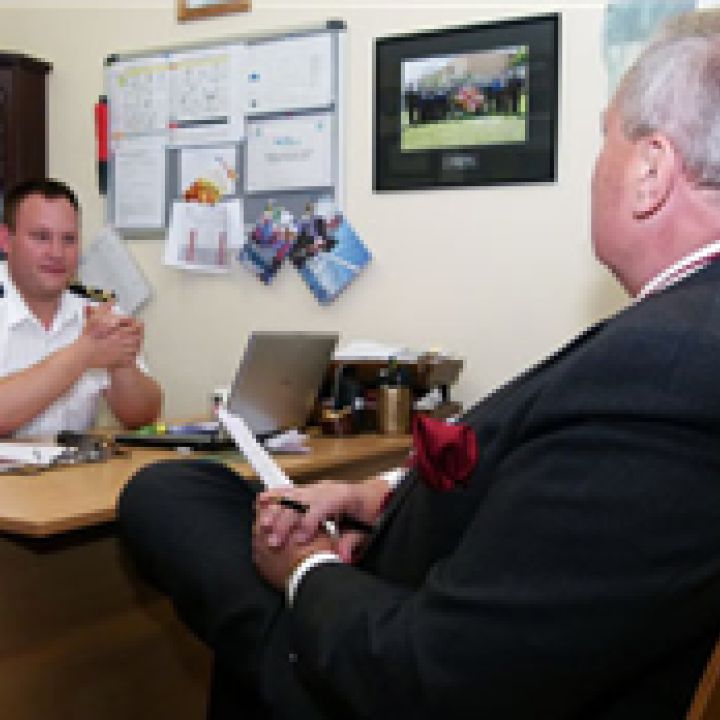 The DL Comes to Visit

Newham Unit was excited and honoured on 12 June to host Mr John Barber DL MRICS, the Representative Deputy Lieutenant for Newham, for an informal visit. Although pre-arranged, Mr Barber insisted that there be no special ceremony as he wanted to see the Unit on a normal parade night.

During his visit Mr Barber spent time with the Commanding Officer finding out as much as he could about Sea Cadets and about Newham Unit and its relationship to John Travers Cornwell VC, whose name our Cadets proudly wear on their cap tallies. He made copious notes and promised to be of as much assistance as he could. He then watched some of the Cadets going through their rehearsals for the Unit's upcoming Royal Naval Parade.

At Standeasy, he engaged Cadets and Staff in conversation, really getting to know what makes a Sea Cadet Unit tick and made a point of speaking with personnel from West Ham Unit, who are currently lodging with us during works at their own headquarters. He later said how "very impressed" he was with the Unit and promised further help with getting our transport back on the road.

Mr Barber was delighted to accept the COs invitation to become the Unit President and, being a Liveryman himself has already made contact with our affiliated Livery Company, The Worshipful Company of Chartered Surveyors, with a view to cementing and growing

positive relations between the two organisations. He also has said that he is looking forward to attending the RNP.

All in all, it was all extremely worthwhile and Mr Barber will be most welcome to visit us again at any time, especially in his new role as President. 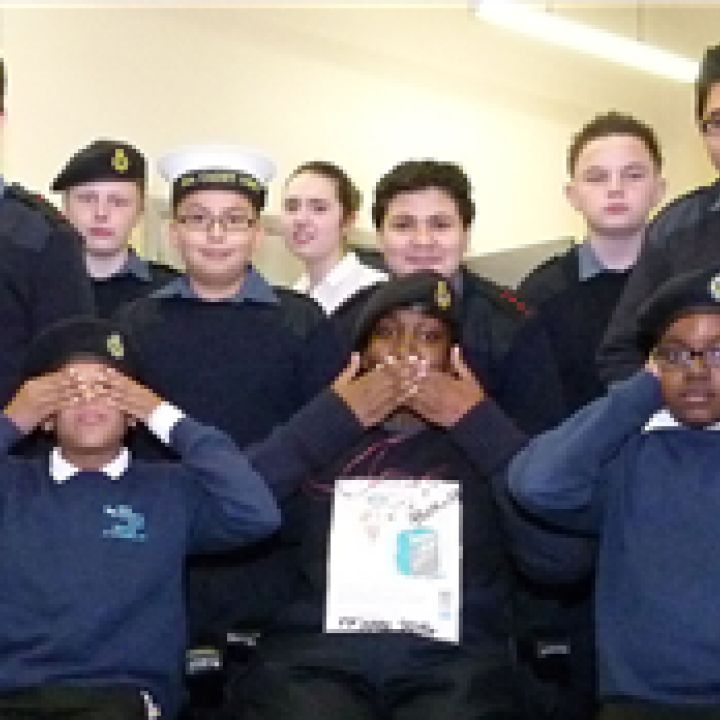 Everyone was intrigued when, one evening in April, one of our Cadets turned up and the Unit wearing an A4 poster around her neck bearing the legend “SILENT PLEASE!” in big black letters.

Unable to tell us what it was all about until after Standeasy, Sade Borishade uttered not a single word for the first 90 minutes of the parade night.

port for and raise awareness of the Free the Children charity which helps and supports seriously disadvantaged young people around the world.

A while ago, a team from the charity visited Kingsford Community School in Beckton, East London where 14-year-old Sade is a student, and told her and her classmates about a young boy who had been enslaved making mattresses and who, after he had escaped and told the world about his plight had been recaptured by his slave-master and shot.

Moved by this and other stories, Sade decided to sign up for the charity. After a few weeks, Free the Children contacted her about their We Are Silent initiative where young people are asked to stay silent for a given period to support their efforts, whilst advertising the fact to those around them. So she printed the poster from the website, laminated it and hung it around her neck. And in the end, she managed not to speak for eight hours and fifty minutes.

Afterwards, Sade said, “I didn’t do it for money this time, but I would like to get some other Newham Cadets to join me in another Silence to raise some funds.”

Sub Lieutenant Mendrys, the Unit Commanding Officer said, “This is an incredible effort and remarkable initiative on the part of this Cadet.” He went on to say that he would definitely encourage other Cadets who wish to get similarly involved in the future.

Well done to Sade. Not only did she stay Silent, but she made us all aware of Free the Children, which some of us had never heard of before.