Until 31st August, only at the Kettering Tesco store, you can help our unit just by shopping with the 'bags of help' scheme. Each time you shop in store, you will be handed a blue token by the cashier. All you need to do is pop that token in the middle box labeled kettering sea cadets to support our unit.

Thanks in advance & remember every little helps

At the end of September, Kettering sea cadets showed of their exceptional drill and did the unit proud when they received the burgee from Rear Admiral Blount. As well as the burgee, medals were also awarded to Colour Sergeant Bell.

The Unit carried out Ceremonial Divisions with Admiral Blount taking the salute from the Guard of Honour, with other guests including The Mayor of Kettering Scott Edwards, Commodore Jock Alexander CEO of the Fly Navy Heritage Trust, Captain Andy Barnwell Chairman of 800 NAS Kettering Sea Cadets and Lt Colonel Robert Blomfield Chairman of RFCA in Northamptonshire.

‘Training Ship 800 NAS’ (TS 800 NAS) proudly have the name of the Royal Navy’s Fleet Air Arm fixed wing fighter squadron who were decommissioned in 2011. Previously they were known as TS Pytchley; a Hunt class destroyer that the people of Kettering paid for during the Second World War.

“We are unique among Sea Cadet Units”. “It’s a great honour to be able to keep the squadron name alive. We aim to ensure that every cadet not only enjoys attending Sea Cadets and take part in all the various activities, but that they acquire lifelong practical skills to take them forward in life and a sense of self-discipline and pride in what they can achieve.”

The Kettering Sea Cadets are distinctive as the only Unit with a Fleet Air Arm cap tally and in addition to strong traditional ties with Naval Bases in Portsmouth and Plymouth can boast links to Royal Naval Air Stations at Yeovilton and Culdrose. They currently have an affiliation with 736 Naval Air Squadron is the Royal Navy’s Maritime Aggressor Squadron and it is equipped with 14 Hawk T Mk1 twin seat fast jet aircraft.  The unit is based at RNAS Culdrose (with a small detachment operating from RNAS Yeovilton) and provides simulated ship attack and airborne intercept training for the Royal Navy's Task Fleet undergoing pre-deployment operational work-ups. Amongst the usual Sea Cadet activities of Sailing and Seamanship, they also take on airborne pursuits and even look at air engineering aspects as well, on visits to the Naval Air Stations.

“The Cadets get the opportunity to not only get afloat in one of our many sailing or power boats but also with our strong links to the Fleet Air Arm they also have the opportunity to see first-hand what it’s like in this key part of the Naval Service,” said Lt (SSC) Chris Jablonski RNR, Executive Officer of 800 NAS SCC. “It was pleasing today to be able to demonstrate our afloat activities to Rear Admiral Blount and  for the Cadets to take him onboard out Trinity  500 rowing boat, It’s all about engaging the kids in different activities and we offer more than most Units here.,

Presenting the Unit with a prestigious ‘Sea Cadet Burgee’ for the year in recognition of continued success of the cadets, Rear Admiral Blount also presented Colour Sargent Bell with his Cadet Forces Long Service Medal for 12 years’ service 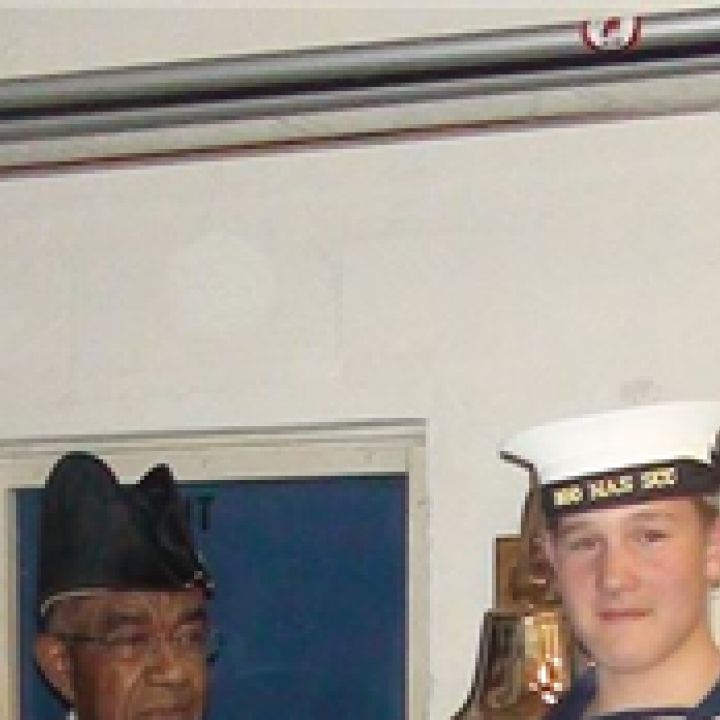 On Thursday 30th April the High Sheriff of Northamptonshire invested Leading Cadet Freddie as his official Cadet for 2015.

Dr Ahmed Ibrahim Mukhtar DL has been a long time supporter of Kettering Sea Cadets and was pleased to be able to present Freddie with his Badge of Office. 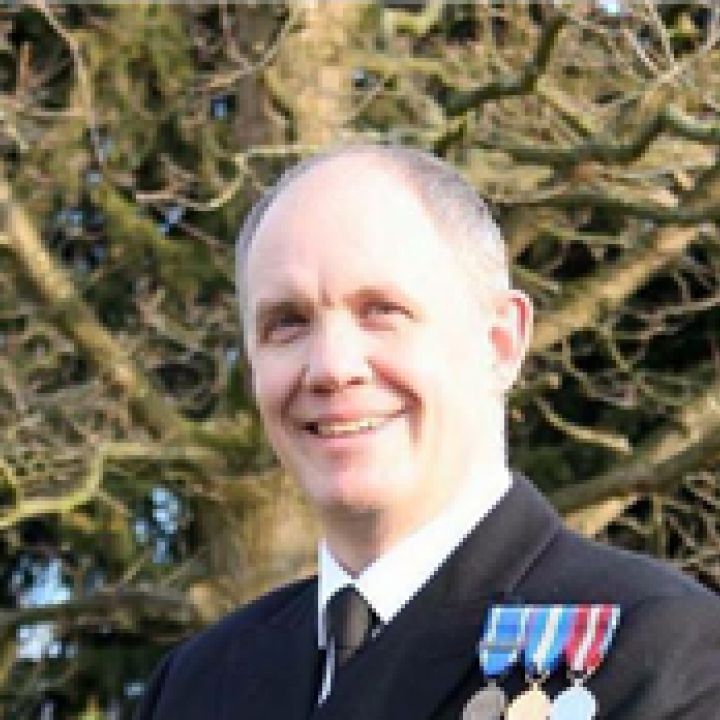 A massive welcome to
Captain Phillip Russell RN, who shall take over the post of Captain Sea Cadets from
Captain Jonathan Holloway RN today at the National drill and piping competition!

We wish you the very best during your time with us, and hope you enjoy every minute of it!...

Captain Philip Russell grew up in South London and after graduating from Loughborough University joined the Royal Navy in 1988. Following training at Britannia Royal Naval College, the Royal Naval Engineering College Manadon and at sea in HM Ships EURYALUS, CAMPBELTOWN and JUNO he joined the Type 42 destroyer HMS GLOUCESTER as Deputy Marine Engineer Officer. During his appointment he saw the ship through operational service in the Adriatic and into its first deep refit. In 1993 he joined Superintendent Ships Devonport, firstly as Project Leader for the special refit of HMS ILLUSTRIOUS and then for the Type 22 frigate refit programme.

From Devonport he attended University College London as one of the first Royal Navy officers to undertake an MSc in Naval Architecture. Consolidating his new found knowledge by working within the Directorate of Naval Architecture in Bristol as the Trimaran Demonstrator Trials Coordinator, with responsibility for the development of the trials and associated safety case for Research Vessel TRITON part of the Navy’s foray into multi-hulled vessels. Whilst in post Captain Russell became the first Naval Officer to be accepted as an associate member of the Royal Corps of Naval Constructors.

Returning to Sea in 1999, Captain Russell joined HMS CAMPBELTOWN as Marine Engineer Officer enjoying an operationally intense and eventful two years which culminated in overseeing the successful repairs to the ship after a ‘close encounter’ with the edge of a Norwegian Fiord! A further appointment in Bristol followed where he was responsible for the delivery of in-service support for Devonport based Type 22 and Type 23 Frigates.

On completion of Advanced Command and Staff Course, achieving an MA in Defence Studies and promotion to Commander in 2005 he took a break from engineering to join Directorate Reserve Forces and Cadets. Here he was responsible for MOD cadet policy during a period of intense government interest in expanding the Cadet Force presence within state schools. He also secured provision of the replacement cadet rifle.

In 2008 Captain Russell became the lead for Minor War Vessel engineering policy within Navy Command Headquarters. Over the course of his tenure he established a sustainable support solution for the Mine Countermeasures Vessels permanently based in the Arabian Gulf, dealt with the aftermath of HMS ENDURANCE’s significant flood and oversaw the introduction to full operational service of the Seafox mine disposal system. Moving from policy to operational delivery he joined the Fleet Operational Headquarters Northwood in June 2010 as engineering adviser to the Commander in Chief. This appointment saw Captain Russell supporting the Fleet during the busiest operational tempo in recent years including Operation ELLAMY the UK mission to enforce the United Nations Security Council Resolution 1973 to protect Libyan civilians and civilian populated areas from attack.

Returning to Bristol in June 2012, Captain Russell joined the Commercially Supported Shipping team as Chief Engineer for Hydrographic and Patrol vessels. He managed a small highly focused team overseeing both routine engineering support and some novel engineering repairs to maintain the highest levels of operational availability within the Royal Navy. In addition, he lead the renegotiation of several key support contracts to realise significant savings whilst maintaining consistent operational output.

In January 2015 Captain Russell was delighted and extremely proud to have been selected to become Captain Sea Cadets.

Captain Russell lives in the West Country with his partner and has two grown up sons. He is a lapsed archer and rugby second row preferring these days to keep fit through extended walks in the countryside. He has an avid interest in nineteenth century history and is particularly passionate about Victorian engineering and when able enjoys combining his love of travel with his enthusiasm for the naval history and industrial archaeology of the period 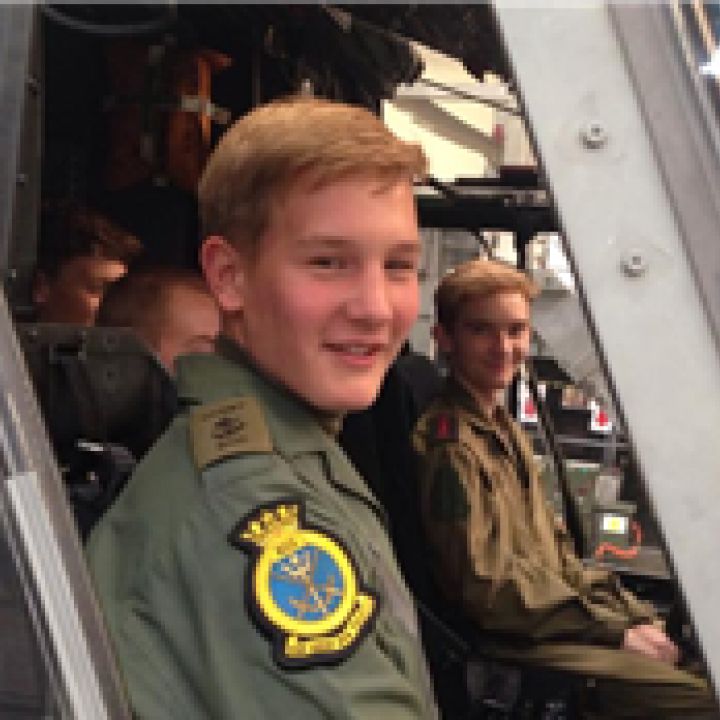 "Leading Cadet Freddie" will work at the Boating Station for 6 weeks over the Summer Period and help the Adult Instructors Train the Hundreds of Cadets who will pass through the centre taking part in Afloat Activities.