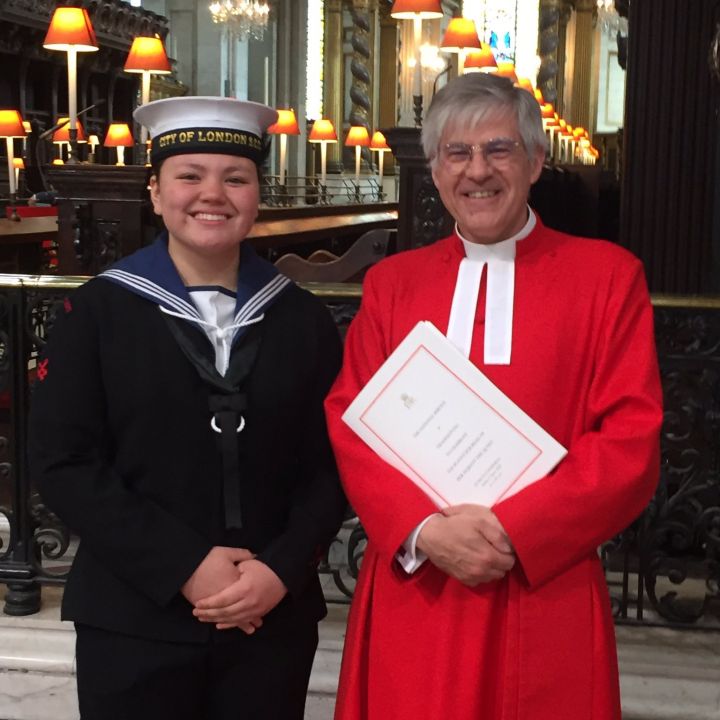 This month our cadets have been very busy!

On Friday 3rd June, Cadet 1st Class Samarah read for the Queen's Platinum Jubilee Service at St Paul's Cathedral! See her below with the Archdeacon of London and listen to her reading here! Not only did she represent the unit really well but also the entirety of the Sea Cadets! The week of the Jubilee, Cadet AJ and Cadet 1st Class Agnes also helped out on the Sea Cadet's stand at the Greenwich Jubilee Festival chatting to members of the public about what we do at Sea Cadets and several cadets were on the Mall to see the Trooping the Colour and RAF flypast!

Our cadets have also been busy doing lots and lots of boating most Tuesdays at the Royal Docks boat station. They have been doing rowing, sailing and powerboating with the unit as well as going on courses to try paddlesport and windsurfing too and we'll even have lots of cadets going offshore on trips this summer! This weekend is the London Northern District regatta and we have two teams entering for rowing!

As well as all this we've had Duke of Edinburgh expeditions, ship visits, ceremonials, regular unit nights and so much more!

We are currently looking for more volunteers to join us so if you are aged 18+ and interested please visit our volunteering page and fill out the request. You can choose to be a uniformed instructor, a non-uniformed instructor or part of the unit management team. 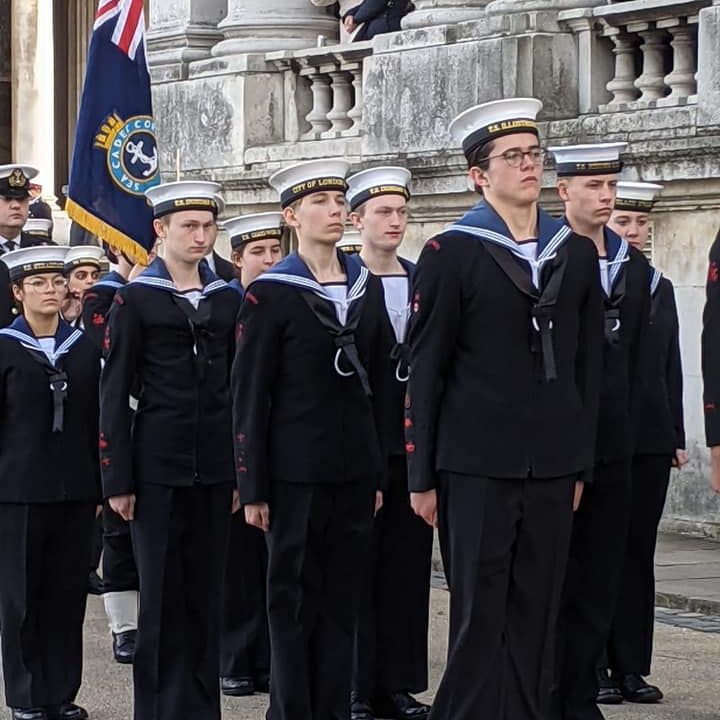 It has been a weekend for our cadets! This weekend saw cadets take part in a shooting course, Junior Monopoly Day and the Trafalgar Day Parade, while in the week on 21st Trafalgar Day and the anniversary of HMS Belfast coming to London took place.

Cadets Jamie, Ronnie and Reuben represented City of London unit at the Lima Company Shooting weekend and course having all completed their Weapons Handling Test a few weeks ago. (NB Cadet training with weapons is undertaken under close supervision in controlled conditions following a safe system of training.)

Sunday 24th saw Able Cadets Max and Tariq represent City of London and London Northern District at the London Area Trafalgar Day Parade at the Old Royal Naval College in Greenwich. The Able Cadets formed part of the Guard, marching in their No1 uniforms alongside other cadets from around the area with many CFAVs attending to facilitate the event including Islington unit's PO Harden!

Trafalgar Day is celebrated on 21st October every year with the parade usually taking place in Trafalgar Square on the closest weekend, however, due to COVID restrictions this was not possible this year and smaller parades took place within districts and areas. This year's Trafalgar Day also marked the 50th anniversary of HMS Belfast arriving in London and opening as a museum ship before becoming City of London units' base!

BZ to all the cadets and staff mentioned and to all who are taking part in further Sea Cadet activities this week in the half-term holidays! 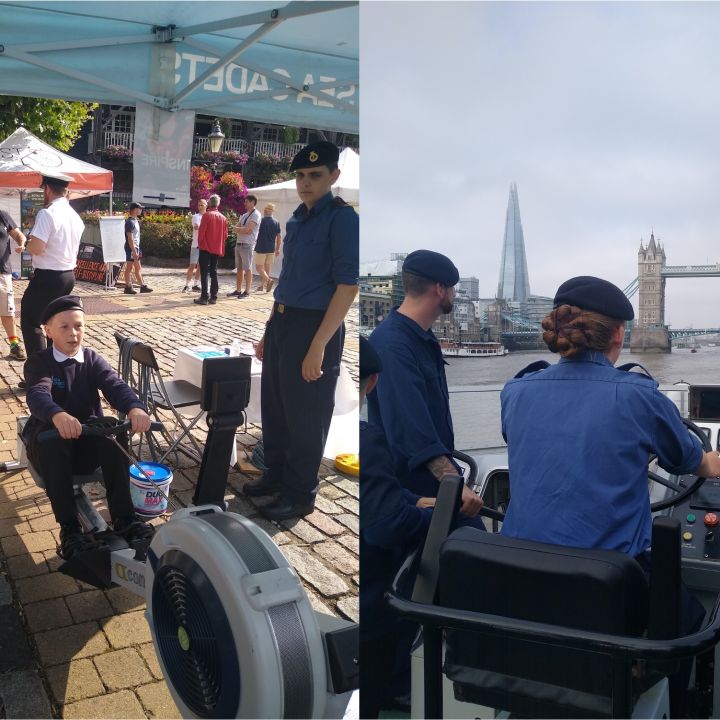 We were lucky enough to be invited by the Royal Naval Reserve to run a stall at the Classic Boat Festival at St Katherine's Docks.
At the festival, the cadets ran a 1-minute rowing machine challenge and a knots board as well as chatting to the public about Sea Cadets and what they get up to. We have already had a lot of enquiries from prospective new entries so your hard work was worth it!
Before the festival opened to the public, we were invited onboard HMS Example, a P2000/Archer Class Royal Navy patrol vessel. Thank you to the ships' company for showing us around and letting the cadets helm up and down the river!
The cadets also got the chance to look around the festival, visiting HMS Exploit, the Metropolitan Police's Marine 1, the Lifeboat 52-02 Museum Ship and HRH The Queen's rowing barge, Gloriana! They even got free ice cream from the kind vendors at Sed's Ices!
BZ to Able Cadet Max, Able Cadet Tariq, New Entry Cadet Agnes, New Entry Cadet Brandon, and Junior Cadet Vincent for coming along on the day! We would not have been able to run the stall without you! 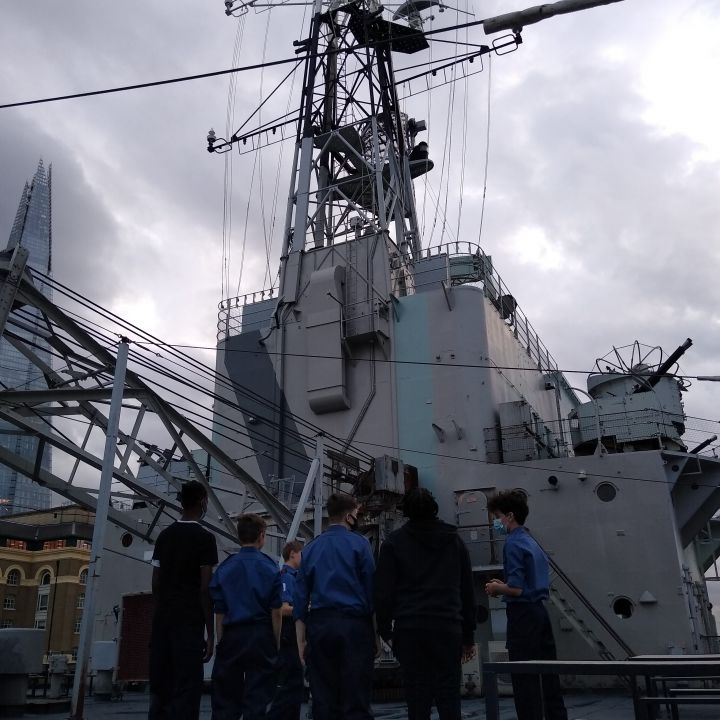 We were thrilled to return to parading on board HMS Belfast last Friday following her revamp!

The evening was spent with an introduction to the ship, a health and safety talk and a fire drill with some boating theory also taking place!

For many of the cadets it was their first time on board the ship as we have many New Entries and since returning to face-to-face activity we had been parading at St Michael's Paternoster Royal Church and the Royal Docks.

We are hugely grateful to the church for enabling us to parade there for the last few months while HMS Belfast was undergoing work.

Also, huge congratulations to former cadet PPO Zanardelli on completing her Safeguarding and Core Drill modules, and to the cadets who have completed their RYA Stage 1 or 2 courses over the last few weeks! 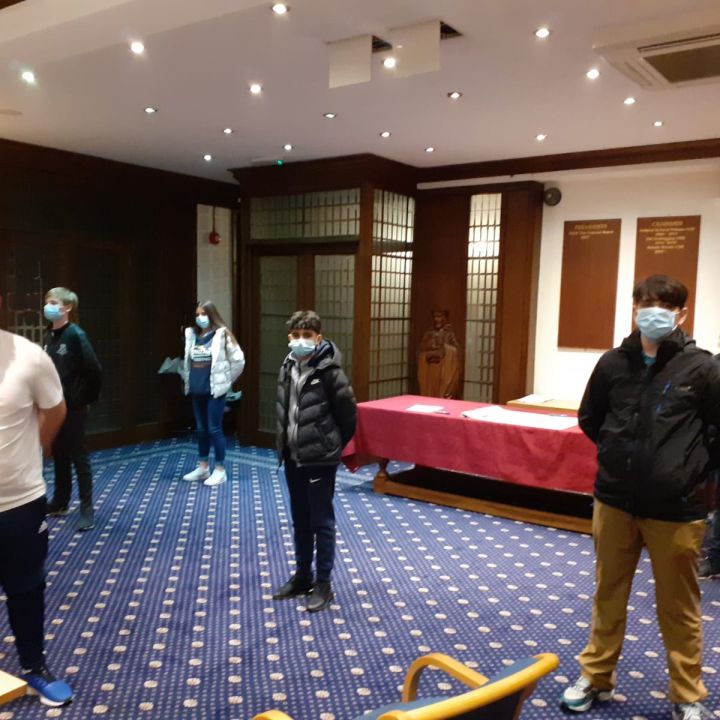 After over a year of parading via Zoom we were thrilled to return to a face-to-face unit night on Tuesday 4th May!

A great deal of work was required by staff and committee to make this possible and we would like to thank St Michael’s Paternoster Royal Church for allowing us to use their space while the Imperial War Museums works are ongoing onboard HMS Belfast.

The cadets enjoyed a relaxed first night back performing some initiative tasks, playing Sea Cadet themed charades and discussing their hopes and goals for the year ahead. This included activities and courses they would like to see the unit host, as well as suggestions on how to make our new space feel more like a Sea Cadet unit.

We returned to outdoor activity a few weeks ago and intend to continue to provide outdoor opportunities for the Cadets to participate and gain qualifications in. This will soon include unit boating opportunities at the Sea cadet’s Royal docks boat station.

There will be a recruitment night in the coming weeks as we have had a lot of interest from parents and prospective cadets throughout lockdown. Also, our unit review will be in a few weeks so once we have eased back into the routine of parading we will be preparing for this.

We look forward to seeing everyone again tomorrow, Tuesday, 11th May!